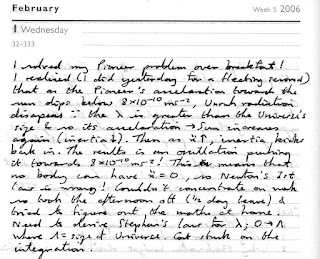 Please keep up your interesting work, don't give up! If you could explain more anomalies other people will be forced to deal with your theory. You are onto something that could change not just your personal life but also our planet.

Another option would be to wait until dark matter research becomes too fruitless and too expensive. If you are right that point should be reached soon.

Oh, and a question I just have to ask:

Is there the possibility to get a signed copy of your book?

If you cut the price of your book by a quarter I reckon you'll see a ten-fold increase in sales. This will increase exposure to this theory and you'll get a lot more people on your side.

Bav83. Thank you for your positive comments. Indeed MiHsC implies a new energy source in the vacuum, if we can make horizons to tap it.

Suge: Cut the price for more sales? You may be right. Unfortunately I had/have no control over the price of my book. However, it has just been discounted on amazon.

Well, I wanted to be a professional physicist once :)
I like your ideas a lot, and I agree that dark matter seems to have about as much rigour as phlogiston.
I get the feeling that the existence of Unruh radiation is contentious in itself - perhaps using it to explain inertia is just a step too far for some.
How would you take a step back and demonstrate Unruh radiation separately?

Hi. One way to look at it is that if you assume Unruh radn does exist then, with MiHsC, you can predict cosmic acceleratn w/o dark energy, galaxy rotation w/o dark matter & other anomalies, but you're right that a direct test for Unruh radiatn would be a good idea. The trouble is you need a huge acceleration to see it. Its temperature is given by T=hbar*a/2*pi*c*k, so Temperature = 4*10^-21*acceleratn, so you need a huge acceleratn to detect it. Some systems may suffice, for example electrons propagating over nanotips, see: http://arxiv.org/abs/cond-mat/0510743

Do you think there's anything in sonoluminescence? E.g.
http://arxiv.org/pdf/quant-ph/9506024v1.pdf

Good point. I looked at sonoluminescence a few years ago, and found I could predict the high temperatures implied by the em radiation given off, with a 'Bubble-scale Casimir effect' the same as the Hubble-scale Casimir effect I use in MiHsC. The problem is the water absorbs a lot of the radiation (light) emitted so it's difficult to be sure exactly what the extreme temperature is and there's seems to be a link with noble gases that I can't explain. IMO there's a chance that the light emitted is Unruh radiation, but how to prove it properly is another matter.

My blog entry on sonoluminescence: http://physicsfromtheedge.blogspot.co.uk/2014/12/underwater-star.html

Could you compare and contrast MiHsC with dark matter WRT gravitational lensing by galaxies? Seems to be one of the big arguments for the proponents of dark matter.