In 2011 it all went quiet on the Pioneer anomaly, because some studies found they could model it assuming complex thermal emission, and so the community was quickly brought into line and ever since at conferences I've been told off whenever I mention it, which makes me feel even more that it is my duty to mention it.

First of all, and this is something you never hear about, the Pioneer anomaly was also shown by another spacecraft: the Ulysses spacecraft which was launched, via a gravity assist at Jupiter, into an orbit around the Sun out of the plane of the ecliptic. The Ulysses orbit could only be explained, said Anderson et al. (1998) (see ref below, page 2) if they included an unexpected acceleration of 12+/-3x10^-10 m/s^2 towards the Sun, in agreement with the Pioneer anomaly of 8.74+/-1.33x10^-10 m/s^2. The Ulysses spacecraft had a different orientation to the Pioneer craft so it's very unlikely thermal emission would apply in the same way.

This supports my opinion that the Pioneer anomaly has been brushed under the carpet by a complex thermal model (that has 1000s of finite elements and two adjustable parameters) rather like the galaxy rotation anomaly has been brushed under the carpet using vague and complex dark matter models. Uncomfortable contrary data like the Ulysses data in the case of Pioneer, or dwarf galaxies in the case of dark matter, have been hidden away in a dark closet like a grumbling relative with a higher standard of cleanliness, but they are still there, muffled but more determined than ever to expose sloppy practices.

Going further, the Pioneer anomaly is not only supported as an anomaly, to the standard model, by the Ulysses data, but also by the galaxy rotation anomaly, the anomalous cosmic acceleration, the flyby anomalies, dwarf galaxies, the Tajmar effect, the emdrive and many more, all of which are easily solved by the same acceleration shown by the Pioneer craft, an acceleration that appears naturally within the framework of MiHsC (see my papers below for the solutions for the Pioneer, galactic and cosmic acceleration).

The fact that the same number 2(SpeedofLight)^2/(HubbleScale) ~ 8x10^-10 m/s^2 keeps cropping up all over the place, should really get massive attention. This is direct evidence for MiHsC, because only MiHsC predicts that crucial number (even in MoND for example this odd number has to be put in by hand).

Yesterday, I gave a talk titled "Human Space Exploration: from Tsiolkovski to Time Peake" to the Plymouth Astronomical Society, and talked at the end about interstellar travel. I explained how relativity means you can get to any star in the galaxy in the lifetime of those travelling (but not those left on Earth) if you can accelerate quickly (to avoid the effects of general relativity on time), get close to the speed of light (c) and cruise, then special relativistic time dilation slows everything down on the ship. It works a bit like suspended animation but without the need for cryogenics. For example, if you accelerate for an Earth-year at 9.8 m/s^2, then cruise for 23 Earth-years at 0.9c, then decelerate equally quickly, you can get to Gliese 667 (which is Earth-like and 23.6 light years away) in about 25 years as measured from Earth and only 12 years as experienced on the ship. I then made the crucial point that travel agencies are not yet offering package tours to Gliese because accelerating to 0.9 times the speed of light takes over 300 times the energy generated by our civilisation in a year.

Not to worry: there are a few bold suggestions for how to get to 0.9c, including antimatter rockets that are propelled by radiation from, for example, electron-positron annihilations, interstellar ramjets that focus and fuse hydrogen collected in deep space, so they avoid carrying heavy fuel and so can accelerate more easily, and Alcubierre drives that bend space and unfortunately need negative matter. I also mentioned my own suggestion (McCulloch, 2013) which is a MiHsC-drive which, like the ramjet, avoids carrying fuel. It is shown in this schematic: 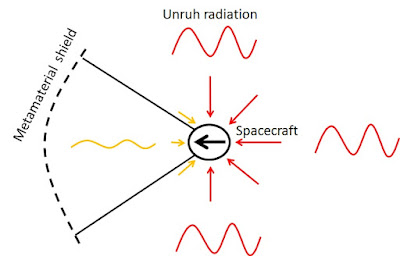 The circle in the centre is the spacecraft core, and it holds in front of it a metamaterial shield (the dashed curve on the left) that can damp Unruh waves. If the spacecraft is accelerated it will see Unruh radiation as shown by the red & orange wavy lines all around it. If the metamaterial shield is set up the right way it will disallow waves in front of the spacecraft (left) so there will be fewer there (the orange wave has less amplitude) and the craft will feel more Unruh radiation pressure from the back then from the front and this will accelerate it forward (the black arrow), and it will do it without the need to carry fuel. The fuel, like the ramjet, is available en route: in this case from the quantum vacuum, made inhomogenous by a manmade horizon. Note: I think the emdrive is inhomogenising the vacuum in a similar way (see McCulloch, 2015).