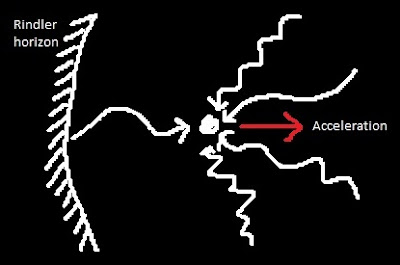 Towards an Experimental Test

The Podkletnov (1992), Tajmar (2009) and Poher (2011) experiments all have a common theme that is consistent with MiHsC: in all three a sudden acceleration of masses in the vicinity of an object, causes that object to accelerate unexpectedly. In the Podkletnov case, the sudden vibrational acceleration of a superconducting disc caused a test mass to be less sensitive to the Earth's gravity, and lose weight, as if it has gained inertial mass (for the vibrational case only, MiHsC predicts 50% of this apparent weight loss). In the case of Tajmar, the sudden rotational acceleration of a metal ring caused an accelerometer near the ring to very slightly move with the ring, as if it had gained inertial mass and had then to move with the ring to conserve the momentum of the system (MiHsC predicts this case exactly, see McCulloch, 2011). In Poher's experiment, electrons were accelerated to huge speeds in a superconductor and then rapidly decelerated as they hit a non-superconducting layer. This caused a 'jump' in a nearby shielded accelerometer.

As far as the data allows, MiHsC is consistent with all three experiments, since it suggests that when an object suddenly sees nearby accelerations, the Unruh waves that are assumed to cause its inertial mass become shorter, and more of them fit within the Hubble scale, so the inertial mass increases in a new way, and to conserve momentum, anomalous motions occur. The Podkletnov and Poher experiments generate huge electron accelerations which allows the easier detection of the anomalous motion, but the problem is that the accelerations involved cannot be accurately quantified. For example, in the Poher experiment the electron acceleration is said to be "greater than 10^15 ms^-2" but cannot be pinned down to a specific acceleration that I can plug into MiHsC to test it. In contrast, the Tajmar experiment produces acceleration from a ring rotation so it is quantifiable, but the acceleration is tiny (2.5 ms^-2) so the anomalous motion is difficult to detect above noise.

The best way to easily and unambiguously test MiHsC would be to reproduce the huge accelerations of Podkletnov and Poher but make them quantifiable as in the Tajmar experiment. Any practical suggestions would be welcome!

It is obvious to me that a recasting of physics is needed. This can be seen conceptually by saying that quantum mechanics is incompatible with general relativity, so one of them, at least, is wrong. On the observational side, anomalies are piling up, and some of them, like the anomalous dynamics of globular clusters, cannot hope to be explained by dark matter. Yet, there is still a huge stigma in physics against alternative theories. If you like, the ecosystem has too little diversity to be healthy. It seems that physicists today confronted with a fascinating anomaly will do anything: propose invisible matter or dimensions, rather than changing the core of Einstein's theories. This is even stranger since Einstein himself believed physics was incomplete & riddled with inconsistency.

I have a humourous analogy, to cheer me up on bad days, that some mainstream physicists are doing 'zombie physics'. The definition of a zombie: "a hypnotized person bereft of consciousness and self-awareness, yet ambulant and able to respond to surrounding stimuli." This is rather unfair, but I do think there is an important point here. Many career-minded physicists have been hypnotized by peer pressure, and are scared of thinking for themselves, being labelled as cranks & damaging their careers. This is making physics dull and sterile, & holding back human progress.

As a first solution I would like to propose a conference, that harks back to the Solvay conferences of the earlier 20th century, when physicists were bold and creative. This FreePhysics conference would invite the creators of new theories, but only if they agree to apply the theories to real anomalies. The theories could then all be objectively ranked depending on 1) their agreement with all the data, 2) simplicity and 3) self-consistency. I suspect it would be a noisy affair! Anyone want to second this?

Great things are done more through courage than through wisdom - German/English saying.

Posted by Mike McCulloch at 08:35 No comments:

The web can set us free

The way a democracy is supposed to work is that we vote for the politicians we trust to make decisions for us, so we don't have to walk around all day agonising over whether tax money should be spent on roads or plumbing and we can think about more interesting and creative things instead. I would like to argue, as many are now also doing, that democracy does not exist in most of the western world and we have governments (in the UK of both main parties) who are not making decisions to benefit the people who voted for them, but to benefit big business. I'm sure others are better qualified to prove this, but I see the problem too and this blog is all I can do about it right now. What convinced me, among other things, are the following:

1: Iraq. I took part in a couple of huge, noble but futile marches in London against the Iraq war. The UK and US invaded Iraq anyway. I don't think there is much doubt that this war was crooked & financially driven. There are myriad reasons connected with oil & finance, eg: in 2000 Iraq converted its oil transactions from the dollar to the Euro. After the invasion they were moved back to the dollar. Transactions in its currency give the US financial leverage. Iran is also now trying to move from the dollar to the Euro.

2: NHS. The UK's National Health Service (NHS) was set up by an exhausted, bankrupt but egalitarian UK in 1948 and the government then promised to support 'all' from the cradle to the grave funded by taxes. This promise of support was diminished in 2012 by the HSC Act and of UK politicians voting on this Act 25% of them had shares in private medical companies (see Marcus Chown's twitter feed). This is so much of a scandal that people should be screaming about it, but the media have not mentioned it. The NHS is arguably the noblest thing any government has done for its people. Ill health is usually a case of bad luck and the NHS represents the great idea that someone should not have to be destroyed financially because of bad luck. Now, the UK government have started a process by which private companies will profit from our bad luck (lucrative, as there's a lot of it about) and also profit from the infrastructure that our taxes have set up. They will start small, but it could be the thin end of a huge wedge and eventually sickness could mean bankrupcy too. It is not inevitable yet, and some are fighting to stop it (eg: the National Health Action party).

3: NSA. It was bravely revealed by Edward Snowden that the UK & US governments have been spying on all governments and all peoples around the world (the US, against their own people & Constitution). The military, financial and other advantages this gives are obvious. What is also revealing is that a few days later Western European countries grounded a Bolivian plane because they thought the man who told them they were being spied on was about to overfly them. This shows they are more concerned about the opinion of the US than the privacy of their own people. Only Venezuela, Bolivia, Ecuador and Nicaragua (& Russia, with a caveat) have had the courage to take action to support Snowden.

It seems to me that we need to change the system so that politicians & the media cannot be influenced disproportionately by big business, make a law that politicians must have a 'normal' job before becoming MPs so they know the real world, strengthen journalists and protect free speech about all topics (what is not discussed openly eventually explodes as violence) and bring in direct democracy, as in Switzerland.

The internet (where spying can work both ways) is helping us to do this already. Assange's Wikileaks has shown us what governments are doing with our taxes and Twitter has enabled ordinary Turks, Egyptians and Brazilians to co-ordinate and challenge entreched powers in a way that unions once did. If we protect the web, it could free all of us in the way Gutenberg's printing eventually freed people from the absolute control of Kings and Popes (this freedom started the scientific revolution) but it will require a peaceful, but emphatic, persistence that the plutocracy must end.

The www, wikileaks, twitter, Assange, Greenwald, Snowden and Manning, and others like them are the keys to this societal shift. If they are supported then our civilisation will be truly enhanced. If they are silenced we will have lost this chance.

"The world is what we make of it" (Carl Sagan, Contact).
Posted by Mike McCulloch at 02:29 No comments: