It's a tricky thing taking a cosmological theory (QI) and applying it to the lab, applied cosmology, because although I am sure of QI from a theoretical and astrophysical point of view because it predicts galaxies and wide binaries in a simple and specific way, its behaviour in the lab is more subject to detail.

That was the reason I received my funds, to see if it could be done. The data from the project has partly changed my mind about solid state details, but I have not changed the fundamental QI theory.

I had originally thought that the best way to get thrust from QI was to use light or microwaves. Light is clean. The photons will see Unruh waves which will be damped by metal structures asymmetrically and the structures will move toward the damped regions. It turned out that QI thrusters based on light alone did not perform well (Tajmar, 2021) and yet QI thrusters that are based on electrons did (the capacitor approach of Becker and Bhatt, 2019). I have thought a lot about this over Christmas, and going back to the QI equations there is an explanation for this in that light, is well, light (it has very little mass), and it does not stick around in cavities for long so the mass-energy you can focus is low, whereas electrons have much lower speed and more mass, but still high accelerations and so the mass-energy you can focus is much higher. Thus thrusters based on electrons are 1000 times more effective and QI predicts them perfectly (see McCulloch 2021). Look at Eq. 2 in this paper. The problem was caused by me earlier assuming that v=c, not so for electrons! When you use the correct speed, you get this plot: 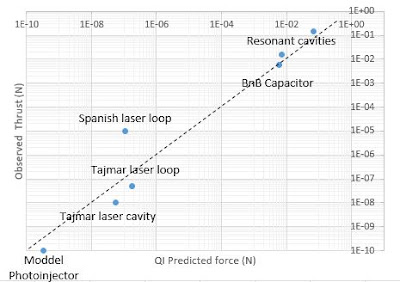 The graph shows a comparison between QI predictions (x axis) and the various experimental thrusts (y axis) from Shawyer, Tajmar, Madrid and Moddel. QI still predicts the emdrive  (top right), which may now not be due to the Unruh waves from the microwaves but from the Unruh waves seen by electrons accelerated by the microwaves in the metal walls, if you make a resonance. This makes no difference to QI mathematically, but it is a different physical interpretation. It accounts for the effectively zero thrusts seen by Tajmar's team for the laser cavities (bottom left) and the tiny but confirmed force seen in Moddel's photoinjector. It implies that the positive Spanish result was an artefact (middle-left) (unless the electrons in glass were the accelerand) and QI predicts the capacitor results perfectly (top right): results now seen in two labs.

It would have been nice if I could have said this years ago, of course, but QI has been since 2005 a learning experience and I am doing the best I can. For example, my first attempt at galaxy rotation in 2006 did not work because I assumed the only accelerations were rotational. I later learned there are other accelerations, and with more detail - better prediction. Over all this time I have not needed to change the QI theory or the maths, but I have changed the detailed understanding of what is going on. I am not adding arbitrary factors either because the behaviour of stars or electrons are known quantities.

QI has not been falsified. In systems where it is the only factor present, such as galaxies or wide binaries, it performs perfectly. In lab applications, my lack of awareness of physical or engineering details has been a problem, but I am willing to be wrong and therefore to learn.