Fusion is a process by which two atoms/nucleii of hydrogen (a proton, possibly with neutrons attached) fuse to form an atom/nucleus of Helium (two protons, perhaps with neutrons). Since the two nucleii to be fused are positively-charged they repel each other, and to get them to fuse they have to be at a very high temperature. One hundred million degrees Kelvin or so is needed to give them enough kinetic energy to randomly collide. The sun's centre is hot enough, and it is a huge fusion reaction turning hydrogen into helium, and only avoids exploding and destroying the Solar system because of its own self-gravity, which holds it in.

Fusion releases a lot of energy, so for 70 years people have been trying to make it happen on Earth, in close confinement. So far 25 billion dollars have been spent on this (Storms, 2012) and the focus has been on huge machines that use magnetic fields to confine plasma: magnetic versions of the Sun (The so-called ITER project). Imagine the surprise then, when in 1989 Martin Fleischmann (then one of the world's experts in electro-chemistry) and Stanley Pons, claimed they had produced fusion in a little test tube! Their experiment is shown below. 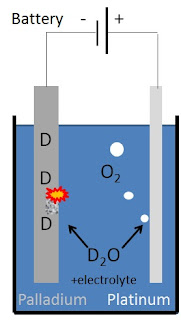 They put an electrolyte containing heavy water in a test tube (heavy water is just like water H2O, but the hydrogen H is replaced by deuterium D, which has an extra neutron, so D2O). They put two electrodes in, the cathode (negative charge) made of palladium and the anode (positive) of platinum, and passed a current between them (electrolysis). The D2O separated into oxygen, which being negative headed for the anode and bubbled off, and deuterium which, being positive, packed itself into the palladium cathode, since palladium has this odd property of soaking up deuterium like a sponge. Several scientists over the past 50 years had predicted that the deuterium could fuse in palladium being in such a packed state. Apparently it did, releasing a lot of heat, see the orange-red 'star'. The announcement of that thrilled the world with the possibility of having such a FusionCell in every home. Virtually limitless cheap energy.

But revolutions are never pretty and this was the usual hysterical mess, because very soon it was noticed that if the deuterium was actually fusing, it should be emitting neutrons and gamma rays and whatever was happening wasn't doing that. A bonus for safety, but because the observations did not fit standard theory, cold fusion was classified as fringe. A few brave souls continued to investigate, and instead of cold fusion, they now call the field LENR (Low Energy Nuclear Reactions). So far there have been about 200 independent replications of the excess heating effect so something odd and potentially very useful, is certainly happening, but why?

I was persuaded to look at LENR recently by twitterer B.McIntyre who pointed out that my 2017 paper on the proton radius anomaly (link to blog entry) might have implications for LENR. His tweet exploded in my head during a tutorial the following day. A few days later I calculated the size of the effect on the train to St Andrews and it was too small, but then on the train back from St Andrews I read Ed Storms' summary (see below) and found out that LENR happens whenever there are tiny cracks in the palladium. See the gray mottled pattern on the palladium in the schematic - cracks in the palladium where the fusion happens. I have applied QI to confined cavities/horizons before (the early cosmos, emdrives, sonoluminescence..) and it changes the physics in intriguing ways..

The University of St Andrews is one of the best in the UK, and its Physics and Astronomy department, according to the Guardian, is the best physics department in the UK, so, of course, they wanted to hear about quantised inertia (QI) :)

I went up there by train on Monday and stayed with them for a couple of nights and gave a seminar on quantised inertia on Tuesday. The talk seemed to go well since there were quite a few questions at the end, and no-one stood up and threw general relativity textbooks at me.

The most useful and enjoyable activity was discussing things informally, and often with a beer :) and Indian food, with the Professor who invited me, and two keen young cosmology PhD students who made some very good points. In the first meeting they made a toast to quantised inertia, and then they started, as they should, to try to pull apart the theory. That is a extremely fruitful approach.

Their first criticism went something like this. It seems inconsistent that I model a star orbiting round a galaxy by using the very low acceleration of its galactic orbit (v^2/r) and saying that the inertial mass has dropped because of QI (and thereby explaining anomalous galactic rotation without dark matter), but the actual components of the stellar system, say the Sun and Jupiter show a much higher mutual acceleration, and the atoms in the Sun for example are zooming around at very high acceleration, so shouldn't the inertia of the system be normal in QI?

I gave an answer to that in this blog post. That is still valid and I explained it to them (they had some questions about whether Rindler horizons mask the cosmic ones), but a simpler way to say this is that in quantised inertia, inertia is not a property of an object, but is a property of an interaction between objects. This makes philosophical sense, since an object alone in an empty universe would not be able to have any meaningful inertia because it would have no way to know if it was accelerating or not. I agree with Mach and the early Einstein so I do not see space-time as something that one can determine one's motion relative to. This means that for Jupiter, when you work out its response, in QI, to the gravity from the galactic centre, the inertia needs to be reduced in line with its low acceleration relative to the galactic centre (the inertia of that interaction), but when you work out Jupiter's response to the gravity from the Sun, the acceleration is large so the inertial mass in QI is not reduced. This means that the theory predicts the behaviour of the atoms in the Sun, the Sun and Jupiter, and the whole galaxy in a self-consistent way. It also means that each object has more than one inertia. The challenge remains how to encode this in the maths, and that was their other criticism: that the maths for QI is not yet fully formed, and does not use the same symbols or metrics as the maths they use, and this is advisable if I want cosmologists to start modelling with it.

I thoroughly enjoyed my visit to St Andrews University. The town itself is very pleasant: they have a city wall, huge golf links (though I don't play) and a beach, but I did not see it this time. I was told, and I thought it was very Scottish, that as a mild 'test of courage' the University gets students to walk along the pier in their gowns. My impression of the people in the Physics and Astronomy department was good because the audience I had seemed curious and open-minded (they did not look at me as if I was a bug, as sometimes happens!) yet they were keen to try to identify any problem. I noticed that someone in the department was also bothering to leave interesting articles lying open on tables for students to read, and the academics pin up their papers outside their doors. There was a general attitude, not of looking efficient, but of genuine interest in what they were doing.
Posted by Mike McCulloch at 04:00 16 comments: