There is a certain comfort in these uncertain times, and I like doing this at any time, in focusing on a non-human puzzle that has a chance of making sense. The puzzle I've been focusing on over the past few weeks is one that is brilliantly explained in Halton Arp's book 'Seeing Red' (see the reference below) and after many weeks of boiling it down to its essentials I've summarised it in this plot. 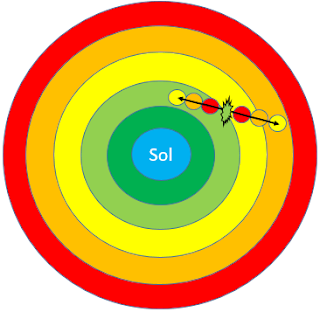 The plot shows the Sol star system in the centre. Observations show that as you look at galaxies further and further away they are increasingly red-shifted. So I've varied the colours on the plot from blue-green in the middle to red around the edge. This red-shifting was discovered by Edwin Hubble in 1929 and was assumed to be a Doppler shift caused by the stars moving away from us, but not so fast!

Along came William Tifft in 1973 who found that these red-shifts are quantized or 'stepped' as shown in the plot by the areas of uniform colour. Galaxies appear to be moving away from us only at certain preferred speeds. This is still being contested, but on balance it looks to be true and this is incompatible with the Big Bang / expansion hypothesis. The mainstream usually explain cosmic expansion by talking about an expanding balloon. We are at one point on it, and as it expands all other galaxies move away from us, like dots on the balloon. The further ones move away faster. The problem is that the only way to get it to work for stepped speeds is to say that the Sun is at a privileged centre of the cosmos, and even cosmologists are not arrogant enough to claim that.

Then along came Halton Arp who started by looking at observations with an unusually clear sight, which is why I admire him. He spotted that some low-red-shift active galaxies (such as the green one in the plot) have quasars next to them that have high red-shift (red circles). The red-shift decays with distance, see the red-orange-yellow circles that look a bit like a kebab (someone on twitter sent me a picture of a kebab in response to the above plot). Mainstream astronomers insisted "No, the quasars are a long way behind the galaxies in the distant background & so they must be putting out a thousand times as much power as the Milky Way to be seen!!" but Arp was sure the quasars were connected to the nearby galaxies - sometimes even linking tendrils could be seen. This also meant that the quasars didn't have to be so ridiculously powerful - not so far away.

This convinced him that a high red-shift does not necessarily mean great distance, and once a barrier breaks down in one place, the chaos tends to spread, especially if you are as stubborn as Arp who has a certain similarity to Fritz Zwicky or Fred Hoyle. He applied this idea to the red-shifts seen in distant galaxies and suggested that that occurs because the light we see from them was emitted long ago when the cosmos was young and objects had a smaller view of the whole and there is 'some' intrinsic process that predicts a lower inertial mass for a young small cosmos (sounds familiar?). This means that when matter was/is first formed, it forms atoms whose electrons have less inertial mass, so the electron orbitals are closer together (less centrifugal force) and so they emit less energetic photons and produce red-shifted light. This accounts for the distant/early galaxies and also the quasars close to the galaxies which appear to have been newly-formed and emitted from those galaxies. An important point is that it is possible to explain the stepping or quantisation using an intrinsic red-shift but it is not using the Doppler/Hubble model.

Quantised inertia looks to be an excellent candidate to explain the above process. In QI the inertial mass is caused by the zero point field (Unruh radiation) which would have been weaker in the early cosmos because fewer quantum waves can exist in a smaller perceived volume (horizon). This explains the cosmic red-shifts and should explain their quantisation, though the numbers still elude me. It also fits with the quasars emitted from the galaxies: if this is new matter being formed then it sees a smaller cosmos (closer horizon) since it has not had chance to collect information from far away, so, again, inertia is weaker.. The proof of this will be in whether QI can predict the values of the quantisation. The observed red-shifts are for example: Z=0.06, 0.3, 0.6, 0.96, 1.41, 1.96 and 2.64. I am working on this now, looking at a Bohr model with varying 'qinertial' mass.

In any event, apparently Arthur C Clarke was ahead of Halton Arp in his imagination. Arp went to see him in Sri Lanka to tell him about it, and, he hoped, surprise him. He told ACC that "Unexplained gamma radiation was being emitted from the Local Group of galaxies..". "Ah, matter creation..." said Arthur C. Clarke immediately (see page 138 of the book below). Of course it is one thing to imagine it, quite another to prove it, but let's see if QI can provide the reason.