Opinion on the UK Election

Apologies, but I cannot help but write something about the election since I am excited by the possibility that Jeremy Corbyn might get into No. 10. There has been since 1979 a huge increase in inequality in the UK. The Gini coeffient that measures inequality has risen from 0.23 in 1979 (the value egalitarian Norway now has) to about 0.4 now (close to the US) and the UK has become a less kind country with more homeless and foodbanks, where assets that everybody used to own collectively (Royal Mail, NHS) are being sold to the rich.

The only solution is to put someone in No. 10 who will listen to ordinary people and not corporations, and will not sell out. In its empirical wisdom, that is what the British democratic system has produced in the form of Jeremy Corbyn, who has stood by his present democratic socialist views consistently for 40 years.

It is very important in my view that, as Labour now propose, the essentials of life: NHS, railways, utilities, post office are owned in common, as they were after WW2. If not, the processes of the game of monopoly take over, capital concentrates in a few hands, and we will all be dependent on the super-rich for the essentials, and they'll raise the price to the maximum. It is also essential to avoid burdening students with debt, so when they graduate they can chose to work on their dreams, rather than aim to get rich quick to pay off their debt. Labour promise to end tuition fees. This, and the increased equality, should produce a more fulfilled and creative society. Hopefully also the general atmosphere will become less money-driven: for example it is also important that scientists are not judged on the amount of funding they bring in, so they will make decisions based on what is scientifically interesting rather than what brings in easy funding (eg: safe topics or expensive equipment).

President Roosevelt's 1944 GI Bill in the US (free college) and the 1948 Labour victory in the UK when the NHS and welfare state were formed, produced a secure and well-educated generation and it is interesting that the GI Bill in the US was followed by its so-called 'greatest generation' (Moon landings, Dylan, Woodward & Bernstein). In contrast high inequality makes a nation weak since the poor become too poor to create, and the rich hide their money away so the economy shrinks. This is why over the millennia there has been a slow tendency away from rule by the rich (the Tory way) and towards democracy and socialism (Labour). Compare for example Ancient Egypt with modern states.

Two of my favourite parts of Star Trek are in The Voyage Home when Dr McCoy goes from the 23rd century back to the 20th Century and regrows a woman's kidney saying "Kidney dialysis? My God, what is this, the dark ages?", and in First Contact when Picard says there is no money in the future. The future can be better, but more advanced technology is not enough. The social system also needs to advance. Electing Corbyn would be a great step towards that. Please vote Labour.

I am giving a seminar tomorrow to the Plymouth Astronomical Society, so here is a summary of the talk which is humbly titled: "How to predict the impossible". The impossible in this case is of course the emdrive, a truncated cone-shaped microwave oven that seems to move very, very slightly towards its narrow end as the microwaves resonate within it. This is causing a lot of incredulity in physics, since humanity has never before encountered a system that is able to move itself in one direction without apparently expelling reaction mass in the other direction. The usual rule is called the conservation of momentum and is a very well tested. The emdrive anomaly was first discovered by Roger Shawyer and has recently been reproduced by others, including NASA's Eagleworks Lab.

For many years I have been proposing a theory called quantised inertia, that states that the property of inertia (that which makes it hard to stop walking into lamp-posts) is caused by relativistic horizons damping the quantum vacuum. When you accelerate in one direction two things happen 1) the waves of the quantum vacuum that you see get shorter (Unruh radiation) and 2) a horizon (like a black hole horizon) appears in the opposite direction that damps those waves. Quantised inertia states that the resulting asymmetry in the quantum vacuum pulls you back against the initial acceleration and so it predicts inertia for the first time, but also predicts a new loss of inertia when accelerations are so low that the Unruh waves get damped symmetrically by the cosmic horizon, so it also predicts galaxy rotation, and its change with time, perfectly without dark matter.

How about the impossible emdrive then? Well, it is an asymmetrical cavity, so the idea is that in the narrow end the microwave photons lose some inertia because the Unruh waves don't fit so well (just like galactic edge stars lose inertia because the Unruh waves they see don't fit well inside the cosmic horizon, and so feel less centrifugal force). As a result the emdrive photons gain inertia every time they shuttle towards the wide end, and to conserve momentum the cavity has to move towards its narrow end. Quantised inertia predicts the emdrive thrust data quite well, as I showed in a previous paper. Further, quantised inertia predicts that if you happen to put a dielectric in the wide end, this will shorten the Unruh waves, so more will fit and the gain of inertia from the narrow to the wide end will be enhanced and the cavity will accelerate more. Considering the dielectrics too, quantised inertia predicts the emdrive thrusts extremely well. The Figure below shows the observed thrust on the y axis and the thrusts predicted by quantised inertia on the x-axis, both without considering the dielectrics (white squares) and considering the dielectrics (black diamonds). 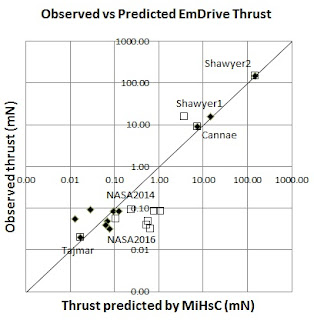 Applications of this are to be found in any form of terrestrial of space transport, and one advantage of the explanation from quantised inertia is that it suggests that dielectrics can be used to enhance the effect, which has been too small to be useful as yet. My latest paper on this is just about to appear in EPL (see the reference below).

To change the subject for a bit, it would be fascinating to go to another star in a human lifetime, but for that you need to travel close to the speed of light so that relativistic time dilation gives you an Einsteinian version of suspended animation. For example, if you accelerate at 9.8 m/s^2 for one year, travel at 90% the speed of light (c) for 10 years and then decelerate for one year at 9.8 m/s^2 you could make the 25 light-year trip to Gliese 667 in 12 years (the duration for those on the ship). Unfortunately, although theoretically possible, engineering gets in the way. To get a habitable normal spaceship to 90% of c you would need more energy than can be produced by our civilisation, or as much fuel as a small planet. The emdrive, though, as quantised inertia suggests, uses 'nothing' as its fuel and nothing is readily available everywhere in space (of course, a power source would need to be included).