I had a friend at York University who was always responding to my comments by saying "Well, how does that put petrol in my tank?" and although I tend to drift off into theoretical realms I have always been surrounded by practical engineers (my dad and my wife) so I always eventually get reminded that science has to be useful.

OK, the most direct, and the one I have now won $1.3 million of funding for (subject to negotiation) is thrust. Quantised inertia (QI) predicts that if you stick a horizon in the vacuum, that is: you use an arrangement of metal to bend light and stop information transfer across a surface of space, then you damp the local vacuum field (Casimir effect like) and nearby objects will move towards the damper in a new way. This form of propulsion is fuel-less. Or, if you like, the fuel is the vacuum/nothing which is freely available everywhere. It won't be technically easy, but it should be possible to launch into space without rockets this way. Also, with standard physics, travel to the nearest star in a human lifetime is not possible: you have to take a planet-sized amount of fuel! With QI it is possible since the fuel is empty space and there's lots of that out there. So, with quantised inertia, the more empty your car tank is, the more fuel you have! There you go Jason.. The evidence for the thruster is in this paper. 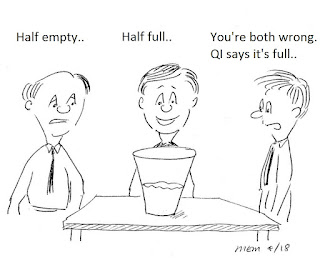 The second application is energy production. Quantised inertia predicts that you can get energy out of the vacuum by forming a tiny closed information space. To put it simply: since dp x dx ~ hbar/2, if you squash dx (ie: a closed space), you get new momentum and energy out. The evidence for this is that this assumption produces quantised inertia (reference) and all the agreements with data I have published, and it may help to explain cold fusion, which occurs in small spaces.

The next application would save as much money initially as the first one. Huge amounts of imaginary dark matter are put into disc galaxies because, to put it crudely, general relativity has not predicted one single galaxy rotation ever (except for one found recently, which looks to be an subsampling error). QI explains galaxy rotation without dark matter, and also explains cosmic acceleration, so a huge amount of research money could be redirected from dark matter searches and dark energy theorists to the thruster applications above.

The fourth application is more speculative, but I am beginning to see that quantised inertia predicts that matter is only the interaction of photons and information horizons, which means that we can form any type of matter from light and horizons: cue the Star Trek replicator. This is similar to the work of Jennison who predicted the electron from photons in a cavity. QI says the cavity is a horizon.

What I'm trying to say is that quantised inertia is the seed for a huge new physics and engineering industry that will dwarf Manchester's graphene breakthrough and eventually dwarf everything else as well. I have evidence to back this: I've published 21 papers now on it, evidence included. I now need this newfound funding to test it, so I hope it does not get torpedoed..

Inertia & Gravity from Conservation of EMI

I'm always looking for ways to simplify quantised inertia since it is not the easiest concept to get across, and also simplification usually leads to a deeper understanding. My usual argument using Unruh waves and horizons is equivalent to what follows below, but there is now a simpler way to frame quantised inertia, which I published in 2016. First of all, just as Einstein assumed that physics should not be frame-dependent, quantised inertia assumes that physics should not be scale-dependent. To explain: a huge entity the size of a galaxy (say) should agree with us on the physics it sees. Therefore, Heisenberg's uncertainty relation (below) should apply to stars too

This is illustrated by the diagram which shows a large object (black ball) and its uncertainty in position (solid envelope) and momentum (dashed envelope). Since hbar must be kept constant, then the more an object knows its position (dx smaller, the solid line is closer to the ball) the more it does not know its momentum (dp is bigger, the dashed line is further from the ball). 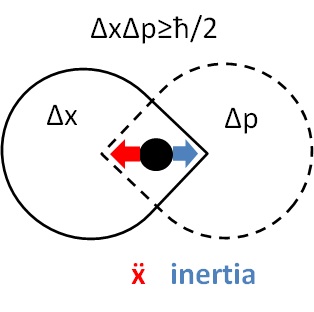 Now let us forget for a moment that quantum mechanics and relativity usually get on like two cats in a bag, and combine them. If the object accelerates to the left (red arrow) then information from far to its right can never catch up and a relativistic horizon (like a black hole event horizon) appears at a distance of

in the rightward direction (see the solid right-angle). So the uncertainty in position is reduced since the object's space has been curtailed from the cosmic scale to a scale 'd'. As a result, the uncertainty of momentum to the right is increased (the dashed line is far from the ball) and the ball will jiggle more rightwards: against its original acceleration. This predicts the inertial force (blue arrow) in the modified form needed for quantised inertia, and so it predicts galaxy rotation without dark matter and cosmic acceleration without dark energy. QI is, simply put, the quantum and relativistic equations shown above rammed together in the way shown in the diagram. To put it more physically: new mass-energy (dp) appears if information about space (dx) is curtailed. Put another way: what is conserved in nature is not mass-energy, but M-E plus information (conservation of EMI).

Now imagine putting a large mass next to an object. To some extent this mass will block information from that direction, reduce dx in the uncertainty principle and increase the momentum (or quantum jitter) that way. The two objects will then jitter-themselves together. This looks very much like gravity, and in the 2016 paper I show that you get Newtonian gravity from it. To get something like general relativity (in a QI form) the same derivation will have to be done fully relativised.

Now imagine that instead of putting a large mass next to the object, we put an information horizon there that reduces 'dx' in that direction and increases the quantum jitter (dp). The object should see a thrust. Since quantum waves are partly electro-magnetic, a conducting metamaterial should do. In my opinion this has already been seen in the emdrive, since QI predicts it well, and everything I have published over the last 11 years implies that this new thrust is possible. Can it be powerful enough to oppose gravity? I think so. Good news: solid lab tests are coming.