It has been a time of transition for me. Last year I was a part time lecturer. Now I am a full time research lecturer with no teaching duties, a post-doc and a hyper-ambitious project to manage. Projects don't come more ambitious than propellant-less propulsion. Anyway, I'm trying to seize the chance of a lifetime with both hands.

With my new funding, I have employed a post-doc in quantised inertia (QI). He started on January the 4th). He has already produced several toy models of basic QI-thrusters, treating QI mathematically as an external force which simplifies some things, and has just written a fascinating report on that, which may become a paper. I have also managed to get all parties, Plymouth University, TU-Dresden and Alcala, Madrid to agree to and sign the contract agreements - a new experience for me.

Last week I visited Airbus & told them how QI could be useful for satellite station-keeping since it predicts thrust without the need for propellant: the kind of thrust that does not run out. You just need energy for Solar sails, assuming it works. I'm now very confident about QI in the astrophysical arena (paper). The difficulty will be making it appear in a lab, but lab tests are still the most direct test and all roads in physics lead to the lab. My talk at Airbus was very popular - people were crowded into the lecture room - I suppose that is not surprising when you suggest to people in an aerospace company that they can ditch fuel!

Next month I will be meeting the great Roger Shawyer, and that will be fascinating. It could be that some polite disagreements will occur because we have different interpretations of what may or may not be going on in those hot copper cones. I'll be asking him about the recent null tests of the emdrive and trying to dig down a little to his comments that the emdrive needs a little resistance to push against. Who doesn't? It would also be great to meet Hawking (but sadly too late!), Milgrom, John Anderson, Paul Davies, Bill  Unruh & Hal Puthoff (I have met the latter by email).

I have submitted a paper to MNRAS showing that quantised inertia predicts wide binary orbits well. To summarise: co-orbiting binary stars far apart show the same sort of anomaly that galaxies do at their edges (too high an orbital speed), but in the binaries' case you cannot add dark matter, because it must stay spread out smoothly if you want to continue to predict the whole galaxy. They can't have it both ways! I've now shown that quantised inertia predicts wide binaries' orbital speeds (orbital speed data from Hernandez et al, 2018) just as well as MoND, and without needing MoND's adjustable parameter or, of course, dark matter, see the plot. There is a discrepancy around one parsec separation where both MoND and QI underpredict the data. 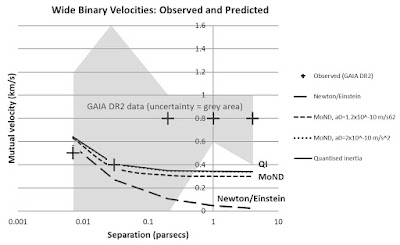 I've submitted a paper to EPL on the Allais effect, and although I realise this is controversial data, it is true that any observation that disagrees with the standard model is going to be controversial, and yet the only observations that will help us build a new physics will have to disagree with the standard model, and so they will be controversial. In other words, the quickest way to build new physics is to look for trouble. I would not say that is how I work, but it may appear that way to some! The Allais effect is also less than ideal since it has not been seen in some experiments, which bothers me, but I enjoyed writing the paper since it involves QI working elegantly in quite a different situation.

I've submitted a paper with Jaume Gine improving the way I derived quantised inertia before from the uncertainty principle, so we can now derive QI exactly that way. He is also helping me to resubmit the paper on EPR and time that I've been trying to get published for years. We are just ironing out our differences now and then Foundation of Physics might be the lucky target.

I've also started a paper that was inspired by my son. I'd just been fiddling around with QI formulae while I was waiting for him to finished a school tutorial, and as I was driving him home he asked me a question about schoolwork "Dad. What's Pi?". I said "3.14.." and immediately realised that the odd number that dropped out of QI onto paper half an hour ago was close (within 0.5%) to Pi. In haste I hadn't made the connection. This result may be a coincidence or it may have given me a huge new handle on nature. It rings true to me, and is very simple. I'll spill the beans when I'm sure it's not a circular argument..
Posted by Mike McCulloch at 10:40 20 comments: