I've had some complaints that my explanation for the emdrive violates a central tenet of special relativity: that the speed of light cannot change. Well, there were reasons not to be worried so much about that, but as it happens I've just published a paper in EPL that shows that the results I derived in 2016 do not imply a speed of light change in the cavity anyway. The new derivation is based on an insight I had one night when I was walking into the local TESCOs (not too often associated with scientific inspiration, but times change): what quantised inertia says is that more Unruh waves (assumed to cause inertia) can exist at the wide end of the cavity, and this simply shifts the centre of inertial mass of the input microwaves continually towards the wide end of the cavity. The cavity then has to move the opposite way, towards its narrow end. This more simply reproduced the same results I had before, but without the need for a change in light speed, so there is no possibility of relativistic violation.

In this new paper I also investigate what happens when you put a dielectric in the cavity. Dielectrics are insulators, so electrons do not move through them freely, but the electrons can shift slightly. So, like people in unions, who can organise to resist forces from above, the electrons can re-arrange en-masse to create a counter field to resist an applied electric field. Air is a dielectric, so are glass and all plastics. Dielectrics really do reduce the speed of light in a way that is well accepted, and since the frequency of light stays the same, the wavelength of the light has to shorten and this means that the Unruh waves can also be expected to shorten in the dielectric, meaning that more of them fit into the cavity at the end with the dielectric.

So, according to quantised inertia, adding a dielectric to a cavity end is rather like widening that end. If you add a dielectric to the wide end you can expect an enhanced emdrive thrust since it boosts the existing surplus of Unruh waves there. Conversely, if you add a dielectric to the narrow end, it should reduce the thrust since it reduces the effective 'taper'. As you can see in the paper, the best-documented NASA tests all used dielectrics, and considering them in the theory improves the predictions of QI considerably. Unfortunately for the first Shawyer test it worsens the prediction considerably, such that the thrust is now equal but opposite to that observed. The observed and predicted emdrive thrusts are shown in this table: 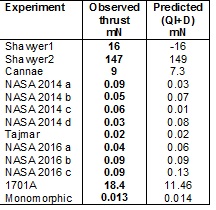