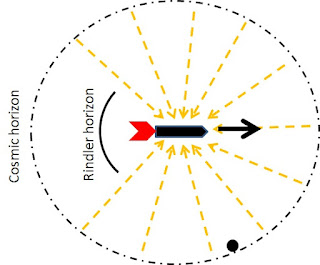 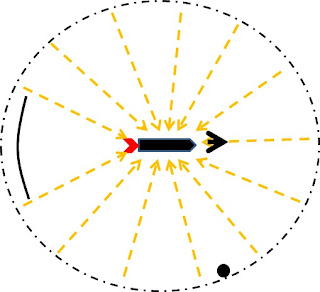 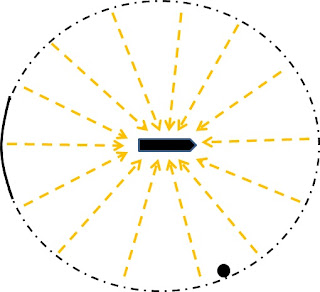 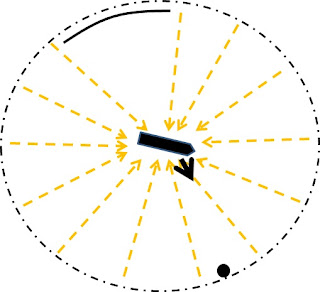 The concept of information has been skirting around the borders of physics for over a century, trying to get in. It first started causing trouble when Maxwell (1867) devised a thought experiment with a rectangular box separated into two by a partition, with molecules in it moving around at various speeds (see the red dots, Fig.1). The partition has a door at the bottom, beside which stands a 'Demon' (in blue). Every time a faster-moving molecule approaches the door going right, the demon opens it and lets it through, so that eventually all the fast molecules are on the right hand side of the partition. This implies that if you have detailed information about the molecules, then you can violate the second law of thermodynamics because the entropy of the box has decreased: where the temperature was uniform, there is now a gradient. This was a big problem, because the 2nd law is a pretty big law to violate.

Leo Szilard (1929), with a more practical bent, then showed that you should be able to get energy out of information in this way (Szilard's engine). Fig.2 shows a cylinder with a partition, one molecule bouncing around inside it. If you have a bit of information telling you which end of the cylinder the molecule is in, say it is in the right hand side, then you can put down the partition trapping the molecule there, advance the left hand piston (frictionlessly and without resistance from the molecule), remove the partition and allow the molecule to push the left hand piston back. Thus you have generated energy to move the piston solely from the information you had about the molecule's position. If you have one bit of information it turns out you can get kTlog2 Joules of energy out, where k is Boltzmann's constant and T is the ambient temperature. Szilard's Engine has recently been realised experimentally (see Toyabe et al., 2010).

As an aside, I have an amusing (to me), version of this, that I thought of when watching a comedy routine by Dudley Moore and Peter Cook (One Leg Too Few, 1964). If you happen to have a one-legged chicken, and you have information about which leg is missing, then you can attach a string to the appropriate side and generate energy as it falls down.. apologies to chickens everywhere.

The huge problem of the violation of the 2nd law in these scenarios was finally resolved by Landauer (1961) who was a computer scientist, very familiar with information. He realised that the memory system of a computer is also a physical system, so the 2nd law should apply. A computer uses binary digits, eg: 010011, but in fact the 0s and 1s correspond to real physical attributes in the solid state memory, so when computer memory is erased (changing it from say 010011 to 000000) this represents a very real elimination of physical patterns and therefore a reduction of entropy, violating the second law of thermodynamics. To preserve the 2nd law Landauer proposed that enough heat must be released to increase the entropy of the cosmos, to more than offset the decrease in entropy of the memory storage device. This implies that any deletion of information must lead to a release of heat and this is now called Landauer's principle.

All this makes clearer something I've been trying to do for a long time: to show that another way of thinking about MiHsC is to regard it as a conversion of information to energy, and that what is being conserved in nature is not mass-energy, but EMI (energy+mass+information). I've recently managed to show that when an object accelerates, information of a particular kind is deleted and the amount of energy released looks very much like MiHsC. I'm unwilling to say more now because I've just submitted a paper on this (McCulloch, 2015), but this is an exciting new development, bringing information theory into the mix, and it's nice to be able to derive MiHsC in two different ways: 1) from the fitting of Unruh waves into horizons and 2) from information loss.