The Importance of Being Empirical

The problem with mainstream theoretical physics today is a lack of connection to reality. String theory or loop quantum gravity, for example, are like constructed virtual realities that bear no direct relation to the real world. The proof is that neither of the theories are testable: they cannot be disproven, and this has given them a longevity they do not deserve.

There is a related trend in modern art and this is interesting because both art and science are ways of modelling the world. In a similar way, art used to be testable. An artist draws a face or and lanscape and there is an objective test. Does it look like the real thing? If so, we can say that the artist has skill. Then the camera came along and this skill became obsolete. Art reappeared in a form detached from reality: abstract art. I won't attempt to judge modern art, but a science detached from reality is a disaster, and takes us back before Empiricism and Roger Bacon!

String theorists may say it is not their fault that the theory cannot be tested. But it IS their fault. If they are scientists they need to work on theories that are testable. Either devise a test or forget the theory and start looking at the real world. This used to be the first rule of science, but it has been allowed to lapse. It reminds me of a comment I once read about ancient Greek science when it had passed its peak and humanity was heading for the dark ages: "Speculation ran way beyond the testable and dwindled into metaphysics" (McEvedy, 1961). I hope we are not drifting into a dark age where smug scholars in ivory towers discuss uselessly what came before the big bang, when they can't explain how local galaxies behaved last week, or even why the turbulence in a pipe starts when it does. The best progress has always come from a little thought applied to interesting observations: a prism experiment lead to a better theory of light, a view of Jupiter's orbiting moons through a telescope inspired heliocentricity and gravity, and the null result from the Michelson-Morley experiment lead to relativity.

On a positive note, I worked for ten years at the UK Met Office, in the ocean forecasting section (not climate research) and the ethos in this Ocean Forecasting section and also in the NWP (Numerical Weather Prediction) was healthy, because the ocean or atmosphere models had to forecast data that was continually coming in from satellites, weather stations and ocean buoys in the real world, so there was a constant check from reality to test and improve the models. This is the best way to do science: lots of data, some anomalies, and a little thinking applied.

I'll leave the last word to Sherlock Holmes' creator: "It is a capital mistake to theorize before one has data. Insensibly one begins to twist facts to suit theories, instead of theories to suit facts." - Sir Arthur Conan Doyle.

I've drawn a schematic that classifies how I see various physical theories. The y axis shows how successful the theory is at predicting the real world, or its testability. For example quantum mechanics (QED) can be tested and is very accurate, whereas Lovelock's Gaia Theory is not very predictive or testable, yet, and string theory is not at all. On the x axis I have Understanding, which is supposed to be a rough measure of whether the theory comes with a physical mechanism that explains intuitively how it works. So, thermodynamics is well explained as being due to the statistical motion of atoms, but the onset of turbulence in fluid dynamics is not at all understood: 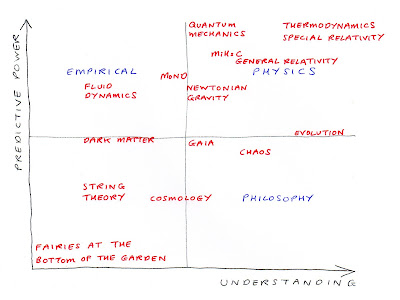 The top left box is for empirical theories which predict the world quickly, but without the need for an understanding. They usually have adjustable parameters. Many models have been born in this box and end up migrating to the right into the physics box when they are understood better, eg: quantum mechanics originated from Planck's empirical formula, with the adjustable parameter being Planck's constant.

On the top right is the physics box, which mixes predictability with some understanding. The ideal physics is in here. Ideal physics can predict nature, but also includes an intuitive mechanism which helps us to extrapolate the ideas to other parts of nature. I've listed thermodynamics and special relativity very high on both axes since the mechanisms for both are well understood and they both make testable predictions that fit nature.

On the bottom right is the box for philosophy which is all about understanding, without necessarily a need for directly predicting details of the real world. Some beautiful ideas that end up as part of theories start off here, like Mach's idea about observables which helped to produce special relativity.

I'm not sure what to call the bottom left quadrant, but here the theories are neither well understand, nor do they make any testable predictions about nature. This is the worst kind of model: untestable. The kind that Pauli would have called: "Not even wrong". Most of contemporary theoretical physics is here. This is probably the case in every epoch: the only theories we remember from the past are the better ones that survive. These tend to be born in the fertile empirical box and migrate slowly to the right, sometimes with a dash of insight from the philosophical box.
Posted by Mike McCulloch at 04:38 No comments:

Explaining MiHsC: Whirling a Ball around on a String

Imagine you are standing there in your garden with a ball tied to a string. Slowly you whirl the ball around you so it is pulled outwards. What it pulling it outwards? No one understands the mechanism, but this effect is called inertia. The idea is that objects tend to keep going in the same direction at the same speed until something pushes on them. The ball has inertial mass so it wants to go in a straight line, but you and the string are pulling it towards you. A balance is reached: an orbit, until you let go of the string and send your friends running for cover.

Zooming out by a factor of a million million million, galaxies are similar. Balls of fusion (stars) mutually orbiting, with inertia pulling them apart and gravity pulling them together. The problem is that galaxies spin around so fast that the inertia as we know it, should win over gravity and tear the galaxies apart. Yet galaxies remain stably intact. The small amount of matter we can see lit up in fusion (ie: stars) seems to hold all the stars together. How?

In the 1930s a Swiss called Fritz Zwicky proposed that matter that we cannot see is responsible: dark matter. This sounds fair enough, but the dark matter is needed only in the outer edges of galaxies, and no particles have been detected that could provide the very specific new physics, and the extended distribution (the halo), needed to account for the observed galactic rotations. Dark matter is also not a satisfying theory because it is not predictive or falsifiable. Given any galaxy you can add dark matter wherever you want to fit your predicted rotation curve to the one observed.

If we come back to you whirling a ball around in the garden for a minute. Imagine you could whirl the ball so fast it becomes a blur. Surely the string would break under the inertial pull outwards. What if it didn't? Well, you could conclude that the string was made of strong carbon fibre so it can pull inwards without breaking (just like extra matter in a galaxy provides extra inwards pull), or otherwise you could conclude that the ball is hollow and has less inertial mass than you thought. This means it is less inclined to follow a straight line and zoom off, and more easily bent into a curved orbit even by an ordinary string.

Unruh radiation is a wave with a wavelength that depends inversely upon the acceleration. At the edge of galaxies the acceleration is tiny and the Unruh waves become so long that a smaller proportion of them can be measured, and Ernst Mach once said that if you cannot measure something you should discard it, and this kind of thinking led Newton to discard Descartes' vortices and led Einstein to discard the aether, so let us say that if the Unruh waves cannot be seen, then they cannot contribute to inertia, so galactic edge stars lose inertial mass in a new way. On galactic "scales" they have lost mass (forgive the pun). A lower inertial mass means the stars can be more easily bent into a bound orbit, even by the small amount of stellar mass we see in the galaxy.

To cut a long story short, such a model, called MiHsC or quantised inertia, works and fits galaxy rotation curves without dark matter (see the paper below). It also does this without adjustable parameters, which means it gives only one answer, and that happens to be the right one.


A paper has just been published by J. Gine called "The Holographic Scenario, the Modified Inertia and the Dynamics of the Universe" (see the link below). I haven't understood the two-screen holographic model he is suggesting yet (I always find these so called 'holographic screens' to be very contrived and unnatural), but I found the last section of the paper particularly intriguing (especially eq. 44) because he uses MiHsC :) He takes the usual MiHsC expression for inertia and rewrites it in terms of Unruh temperatures (though in the paper he doesn't quite complete this conversion..) which allows MiHsC to be thought of in a more overtly thermodynamic way. Whether this will prove useful or not I don't know! Gine's paper is here:


All this thermodynamics reminds me of a thermal experiment I suggested in 2007: the effect of MiHsC on Unruh radiation (disallowing the longer, colder, wavelengths) should also apply to normal radiation, so the energy radiated by a very cold object should be very slighly less than that expected from the Stefan-Boltzmann law. For more details see the last part (around eq. 13) of this paper: