Since I have just submitted a short paper on this, I'd like to explain how I think cold fusion might be happening. The following makes a nice story, but still could be wrong. We'll see. It is also dangerous ground, but it is necessary to keep pushing into such territory, because that is where the new physics is (partly because very few people have dared to go there yet).

I've been thinking about LENR (ie: cold fusion) since before Christmas, ever since Bob McIntyre on twitter noted that my earlier paper on quantised inertia and the proton radius anomaly [ref 1 below] might apply to it. It is also pretty clear that QI predicts that an earlier, much smaller, universe would have been hotter [ref 2] and you can see this without QI, simply from the uncertainty principle: dp.dx>hbar, where hbar is the reduced Planck's constant. If you shrink the 'known space' of an object (dx), then its uncertainty in momentum must increase, and therefore its temperature.

I've been reading a lot of Ed Storms' papers and the comment he made that impressed me was that the common factor in all the successful LENR experiments are nanoscale cracks or gaps in the palladium or other metals. In my space- and horizon-obsessed mind these are just mini-universes. See the schematic below of a crack (the white area) inside an area of red-hot palladium metal.

Coming back to the uncertainty principle: in cracks, the uncertainty in position (dx) is small, so dp and hence the temperature of the walls must be high (the red area). For the nanoscale cracks in palladium, the predicted temperature is still not hot enough for fusion, which needs temperatures of 100 MK, but recently I was cooking soup and noticed that the walls of the pan were hot and the soup was moving towards the centre. This is a different convective process, but it gave me the idea that the crack walls might be radiatively pushing the deuterons together (see the red arrows in the schematic). I've scribbled through the maths and it turns out that if the cracks are smaller than 86 nm, then the crack's walls are hot enough, and the radiation pressure, is strong enough to push the positively-charged deuterons together over their mutual repulsion and cause fusion. It might also account for sonoluminescence: light emission from small bubbles. So what do you think? Physics from the kitchen?

(Note: Argh! I have found an error in my derivation :( Thank goodness for dimensional analysis, so I will leave this blog entry here to record my blunder, and get back to the drawing board. Apologies. Correction No.2: I've decided now it was right all along, so have resubmitted it.).

If you wish to support my work a little, you can do so here:
https://www.paypal.me/MikeMcCulloch
Posted by Mike McCulloch at 05:03 70 comments:

How QI gets rid of dark matter

Many people have asked me for a simple, graphical explanation of how quantised inertia (QI) gets rid of the awful dark matter, so here it is, for them. We start off with a schematic of a galaxy (see below, in yellow). Outer stars have been observed to have a rotational speed (the red arrow) so big that the inertial (centrifugal) forces (white arrow) should be much greater than the gravitational forces from all the matter we can see (the black arrow) and so, if it had any decency, the galaxy ought to fly apart. The problem is that galaxies are showing no decency at all, and do not fly apart. Why? Mainstream astrophysicists add arbitrary dark matter to boost the gravity arrow and achieve balance that way. Quantised inertia shrinks the inertial arrow instead. 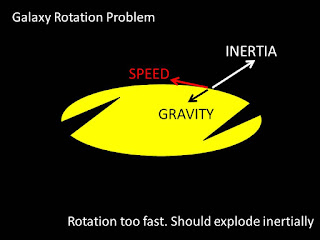 To explain quantised inertia I will start with an oceanographic analogy (see below). A ship is parked at a dock. Lots of ocean waves can exist and hit it from the seaward side (the wavy line), but no waves can fit within the gap between the ship and the dock, they don't resonate in that space, so on average the ship is pushed by the waves towards the dock. If the crew of the ship were unaware of the waves they would say "It is a magic force moving us towards the dock!". 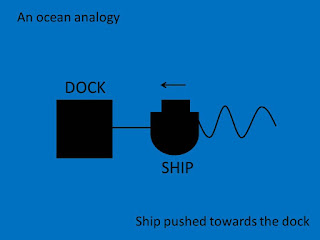 There is another sea. One predicted by quantum mechanics. It is a sea of quantum particles, and we have only recently detected it because Hendrik Casimir showed that if you put two plates very close together, like the ship and the dock, the plates will move together. That has now been confirmed (in 1996) so this invisible sea really does exist. Now consider an object accelerating to the right (black circle, white arrow below). It will see the quantum sea, actually an enhanced version of it (Unruh radiation). Relativity now says that in the opposite direction to the acceleration, information will not be able to catch up with the object. So there will be a horizon, like a black hole event horizon (see the black crescent). In quantised inertia this horizon is treated just like the dock wall in the analogy. it damps the waves between the object and itself. As in the analogy the object sees more waves from the right and is pushed back, always against its acceleration. This 'asymmetric Casimir effect' predicts what we always assumed before to be a 'magical' inertial mass, because we couldn't see these quantum waves (which only exist in the object's reference frame). 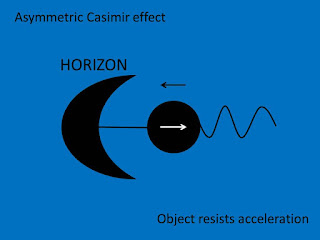 Information also cannot get to us from beyond the Hubble horizon, since stars there are moving away from us at the speed of light. So this horizon damps the Unruh waves equally all around the object, and so it damps the waves on the right side (there already aren't any on the left) - see the change from the dashed waves to the solid waves, below. This reduces the effect of the aCe process detailed above, and the resistance to acceleration, the inertial mass. This reduction is more serious for the longer Unruh waves that occur for low accelerations,since these 'feel' the cosmic boundary more. 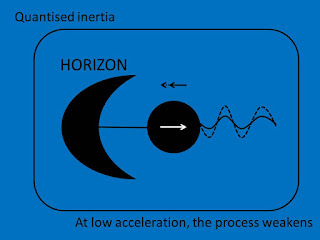 The prediction then is that inertial mass is lowered for stars at the edge of galaxies, since they orbit in a slow curve and have a very low acceleration. This reduces the centrifugal (inertial) force outwards (see the change from the dashed to the solid white arrow, below) and the inertial force now balances the gravitational force - quantised inertia predicts the balance exactly for these edge stars, using only the visible matter, the speed of light and the Hubble scale, so that no arbitrariness or dark matter is needed. 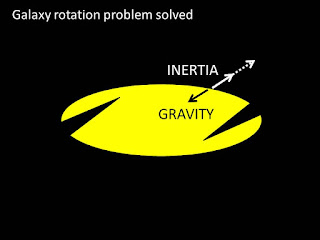 I hope you can appreciate the beauty and simplicity of this theory. It has not yet been tested on the insides of galaxies, I'll need a galaxy model for that, but it does predict a lot of other observations as well such as the cosmic acceleration and the emdrive.

If you wish to support my work a little, you can do so here:
https://www.paypal.me/MikeMcCulloch
Posted by Mike McCulloch at 07:59 80 comments: