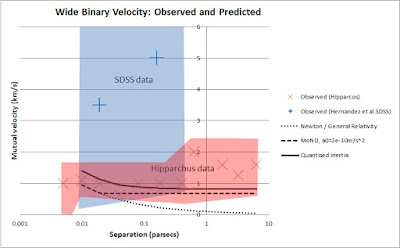 Scarpa et al, 2006. Globular clusters as a test for gravity in the weak acceleration regime. Proceedings of the 1st crisis in cosmology conference. http://arxiv.org/abs/astro-ph/0601581
Posted by Mike McCulloch at 09:20 14 comments:

Sorry for the gap in blog entries, but I have been traveling a lot, explaining to groups in Germany, exotic Hampshire, and the US, how quantised inertia predicts thrust. As you may know, I now have significant funding to do tests, and will report on these as openly as I can - this is important to me since I value feedback and comments and they help to progress the work.

So how does quantised inertia predict thrust? My explanation of this is becoming more streamlined as time goes on, so here is the latest (see, for background, McCulloch, 2016). QI says that all masses move because of the quantum 'jitter' that can be made anisotropic by horizons (barriers to information). The bold assumption in QI is that horizons are real and are able to reduce the 'dx' in the uncertainty principle, so that dp increases in that direction and the quantum jitter moves the object horizon-ward (see here). These horizons can be either relativistic, or solid conductors (as in the Casimir effect). If the quantum vacuum is more intense, you get more push. The quantum vacuum becomes more intense for accelerated objects because of the enhancement due to Unruh radiation. So the QI recipe for launch, so far, looks like this:

Step 1: Make something that accelerates very fast so that the quantum (Unruh) waves intensify and also shorten so much that they are short enough to interact with a metal structure. For example, to interact with a structure of size 1m, the acceleration of the core has to be about 10^18 m/s^2. This accelerating core could be a spinning object, resonating microwaves (as for the emdrive, which QI predicts) or a hyper-vibrating piezoelectric (as in the Woodward devices, which QI also predicts).

Step 2: Damp the Unruh waves on one side of the core more than the other. If the acceleration of the core (circle) is big enough, this can be done by putting a thicker conductor, say, above it (see the left schematic), or having an asymmetric cavity (see middle) or a patterned structure whose mesh size is bigger in one direction than another (see the figure on the right). All these structures would damp Unruh radiation (orange) more above the core (darker shade) moving them up.

Step 3: Watch the core accelerate towards the more shielded side. Be patient because at the present level of technical development (thrusts of about 1 microN) it would take 11.6 days for it to accelerate to 1 m/s (for a 10 kg setup), but now QI gives us hopefully an understanding of what is going on, it suggests ways to boost this force, and launch should one day be possible. It costs $62M to launch a SpaceX Falcon 9. At the moment, given the funding budget I've just had to submit, I'd estimate a potential factor of 100 reduction in cost for the kind of thruster QI should allow.