We learn by doing, MiHsC, emdrive

I'm always saying to my students that "The best way to learn is to do", and I always enjoy scribbling back-of-the-envelope calculations (in the manner of Hans Bethe and Enrico Fermi) so here's a quick MiHsC-emdrive calculation I did recently. Note that it is not as rigorous as my paper, it is a heuristic simplification.

Step 1. Calculate the mass of light in the cavity

Step 2. The MiHsC-acceleration of photons in the cavity

The new effect predicted by MiHsC is that photons' centre of mass is continually shifted towards the wide end. Normally, as in my paper, I would calculate the photon mass change implied by MiHsC as more Unruh waves are allowed at the wide end, increasing photon mass there in a new way. Here, in order to point out the wider connection with MiHsC-cosmology, I'm going to take a short cut and calculate photon behaviour by noting that in MiHsC, a volume (sphere) bounded by a horizon must have a minimum acceleration of
a = 2c^2/L
where L is the diameter of the sphere. If you put in the Hubble volume L = 2.6x10^26 metres, then MiHsC predicts the recently-observed cosmic acceleration (usually attributed arbitrarily to dark energy) and it also predicts the acceleration below which galaxies misbehave and their rotation (usually attributed to arbitrary dark matter). We can regard each end of the cavity as being a little Hubble sphere (introducing an error of probably a factor of two) but the acceleration of the photons along the length of the emdrive cavity is then the difference between the accelerations at the wide end (the big cosmos) and narrow end (small cosmos), which is:
a = 2c^2/Lwide - 2c^2/Lnarrow = 2x(3x10^8)^2 x (1/0.16 - 1/0.1275)
a = 2.87x10^17 m/s^2

Step 3 - By conservation of momentum

As the microwave photons are shifted rightwards by MiHsC (see the red arrows in the Figure) the cavity must shift left to conserve momentum (see the black arrow). 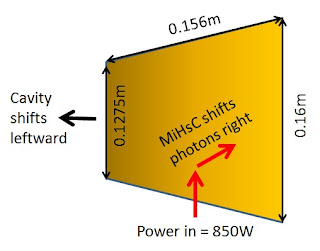 I always enjoy the closure and elegance of this sort of calculation and I believe that the ability of a theory to predict something openly on a single sheet of paper speaks well for it, in contrast to theories that require adjustable parameters hidden in labyrinthine computer programs or in the small print of complex derivations. There are no such parameters here.
Posted by Mike McCulloch at 03:36 16 comments:

Last night I drove to the big out of town TESCO on a mercy mission to buy some fish food and I was glad I did because while walking in the fresh air into the shop, what I have been thinking about, and doing messy calculations on, over the past few days, suddenly became clear. It is a clearer way to explain my MiHsC-emdrive paper. I laughed out loud in the entrance to TESCO, but luckily they didn't lock me up.

In the emdrive the magnetron puts microwaves into the cavity. MiHsC allows more Unruh waves (greater photon inertial mass) at the wide end, so as new microwave energy is put into the cavity its centre of mass is continually being shifted by MiHsC towards the wide end (see diagram). To conserve momentum the cavity has to move the other way towards the narrow end (note: this needs new physics, MiHsC, not standard). 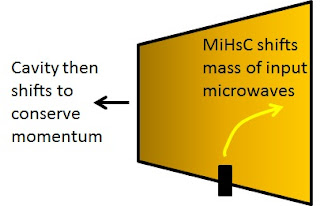 But hang on!: MiHsC is causing a huge acceleration of the microwaves of 10^18 m/s^2 (~c^2/L). The cavity is not accelerating that much the other way? Why?

Because the cavity is so much more massive. The microwaves in the cavity have a mass (given m=E/c^2) of 10^-20 kg (roughly), whereas the cavity may be 10 kg, so the acceleration of the cavity to conserve momentum can be 10^-21 times smaller, which is about 10^-3 m/s^2, implying a force (F=ma) of a few microNewtons. This is the same process as in my paper but this explanation is different and hopefully much clearer.

An analogy to this would be a small 'magic' boat that everyone is puzzled about, because when it rains it always moves forwards. How is this possible? If you look at the boat from a different angle, from the side, you become aware of the slope in its bottom which pushes rainwater to the back and moves the boat forwards. Similarly, look at the emdrive with MiHsC and the slope is a gradient in the zero point field.

The moral of this piece is clear - when I get rid of the flu I should go for more walks!
Posted by Mike McCulloch at 02:09 26 comments:

Here are my responses to John Baez who wrote a blog criticising MiHsC as applied to the emdrive and other things. I sincerely appreciate his comments and they are useful since they show up what is not yet understood by the mainstream about MiHsC. Indeed, his criticisms are based mostly on a lack of understanding of MiHsC, and can be refuted. Below I have copied the most pertinent comments from his blog (in quotes and italic, see also the blog link below) and responded:

"So the inertial mass of an object is caused  by the Unruh radiation?   Okay... yup, that's certainly new.   Let me just say there's no evidence for this."

I have shown that by assuming that inertia IS caused by Unruh radiation (made non-uniform by horizons) I can suddenly predict the anomalies that have baffled mainstream physics, for example: galaxy rotation without dark matter, cosmic acceleration...etc. This constitutes evidence.

"[The Casimir effect] is a reasonably large force when the plates are a few nanometers apart, but it rapidly becomes weaker as you move them farther apart.   So now imagine they're as far apart as most distant galaxies we can see...."

This shows a misunderstanding of MiHsC. The new effects are not to do with the separation of galaxies, but due to the Unruh waves (which are very long for accelerations as low as those at the edge of galaxies) which are disallowed by the Hubble horizon. For the size argument, see my next comment.

"at rather small accelerations the Unruh effect is so tiny that the thermal radiation has wavelengths even larger than the size of the observable Universe.  That's true.  And that of course means that this effect is even more absurdly weak than in the example I gave."

In fact, I'm saying that these larger-than-Hubble-scale Unruh waves logically cannot exist. Yes, the predicted effect is usually incredibly small, but since the accelerations in the edges of galaxies are so tiny anyway, MiHsC makes a detectable difference. Also, it is not the Unruh effect alone that I am implicating in inertia but the way information horizons make the Unruh radiation non-uniform in space so that new dynamics/energy can be got out of it. An analogy for the way MiHsC does this, that I used in my book, is that horizons are selecting/deselecting or tuning Unruh waves (quantum vacuum) in a similar way to how my fingers select particular acoustic waves (nodes, notes) when I play my flute, or when a guitarist plays a guitar.

"Again, two things stand out: 1) it doesn't work like this"

I realise this is meant half-jokingly but of course it is not valid to argue that a theory is wrong, just because you believe it's wrong.

"Planck's constant - the number that shows up in every calculation in quantum mechanics - never shows up in this paper.  So McCulloch is not actually doing anything with the Unruh effect!"

Planck's constant is in there, but since E=hc/lambda and the lambda (wavelength) has been constrained via resonance to be proportional to the length of the cavity L, it is possible to write E=hc/2L and so h can be broken up and written in terms of E, c and L which is what I did implicitly in the paper.

"So his photons have mass - and on top of that, the mass changes with time: see his Equation 4!"

I hope John Baez and others read this, and come back with a more empirical set of criticisms. That is how it works.

A new emdrive result has just been published by the Chinese (Juan et al., 2016) and I have updated my former table (there are now 9 results, see below). Despite the negative buzz online, this Chinese result is happily consistent with all the other experiments & MiHsC (unlike their earlier 2012 results). 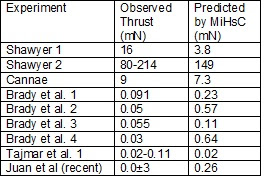 Also, I gather there has been a frantic search for Planck's constant in the MiHsC formula. Planck's constant is implied in the formula, but the physical fact that the photons are resonating (tuned to fit) within the cavity means that it is possible to re-express h using E, c and L (the length of the cavity). My full response to John Baez is here.

(Thanks to Dr Rodal for pointing out that the new result was 0 not 0.7mN. When I've checked the literature it may be also that the uncertainty +/-3mN should be +/-0.7mN, but this doesn't alter the agreement).