Possibly the best way to test Quantised Inertia (except in the lab and the lockdown has postponed that for now) is to look at far distant (ie: high redshift) galaxies whose light is reaching us from an epoch a long time ago. This is because QI's predictions of galaxy rotation are very different from those of the standard model and MoND at high redshift. For the older theories the relation between the orbital speed of stars at the edge of galaxies (v) is of the type

where M is the visible mass and K, crucially, is a constant. How quaint! In quantised inertia the K is no longer a constant, since the inertial mass depends on the width of the cosmic horizon, and the formula is

where G is the gravitational constant, c is the speed of light and Theta is the width of the cosmos, which varies with time. In the mainstream way of looking at it, this variation is because the cosmos is physically expanding. I prefer to assume that the information that local matter has about the cosmos is expanding, rather than the cosmos itself (this was also claimed by Halton Arp). Therefore in the past the cosmos, and Theta, were smaller and so, according to QI, all inertial masses and centrifugal forces were lower. Therefore far-off, ancient galaxies could afford to spin faster at the same mass and still remain bound.

As luck would have it, astronomers are just starting to see such galaxies and I talked about six of them in the paper referenced below (McCulloch, 2017). It turns out that they do indeed spin faster. Another one has just been seen at Z=4.2 which is called, romantically, DLA0817g or The Wolfe Disk (see Neeleman, 2020) and this means I can now compare QI with seven data points. I have summarised the data here: 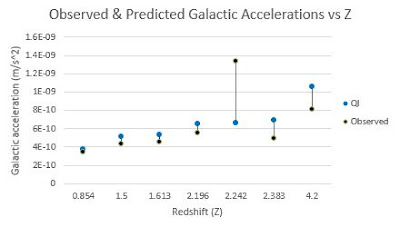 The plot shows the observed acceleration of stars at the edge of the galaxies (y axis) and you can see that it increases with redshift (black dots). See the black dots. Note that the value for the galaxy at redshift Z=2.242 is aberrant and it looks like an outlier. The plot also shows (blue dots) the predicted accelerations assuming, as quantised inertia does, that the galaxies cannot slow below the minimum acceleration of 2c^2/Theta where Theta is the cosmic scale at the epoch the galaxy is in. So, to recapitulate, the higher redshift galaxies were in a smaller cosmos, so according to QI all inertial masses were lower, so they could afford to spin faster and still remain stable. You can see that the predictions of quantised inertia track the observed increase in spin quite well. This is not yet conclusive though, since maybe other effects are present. The next step is to compare what Newton/GR predicts for the same plot, but for that I need to find the masses of these systems, which is not as easy as it sounds since some masses are derived from the dynamics so include the dark matter fudge. What is clear from this is that the more high redshift galaxies we observe in this way the better!

Physics with an Edge & Thank Yous

Those with an keen eye may have noticed that I have changed my blog title from Physics from the edge to Physics WITH an Edge, which reflects the fact that QI predicts better than the old physics and is perhaps no longer at the fringe.

To my great joy, a couple of week ago my best friend at primary school, who is now an eminent surgeon, recently got back in touch after 40 years. One of my earliest and fondest memories is of talking to him about the need for interstellar travel during a sleep-over at his house. According to Nick Hornby friends are people who like what you like. So in his honour, I'd like to thank some of the people who have contributed to QI and who I regard as friends:

Alex Unzicker. When I first started publishing on quantised inertia I felt alone, since physicists did not seem to be interested in the old style of physics, that is data-driven with a dash of philosophy. Then I read this honest paper by Unzicker which is still one of my favourite reads and has been a inspiration to me: Link. More recently I have been reading his books and they are full of the same irreverent, data-driven and philosophical attitude. People often lament that theoretical physics would still be honest if Feynman was in it. Dr Unzicker provides the same role. We have skype'd in the past and I hope we can do so again many times. His latest book: Link

Jaume Gine. I first emailed Jaume in 2011 to mildly criticise his interpretation of my work and it is to his credit, and my gain, that we have collaborated on several papers since then. If you look at the record of our collaboration you will see that he is a more accurate mathematician than I am, and he has also prodded me towards interpretations of QI using thermodynamics. He is now helping me to publish a paper I've worked on since 1992 on the EPR paradox, adding the details that I omitted in my typically simple approach. Our most recent collaboration includes a complete derivation of QI just from Heisenberg's uncertainty principle: Link

Travis Taylor. I first came across Travis Taylor when he emailed me in 2017 to say that he'd written a paper about my work, but the journal had insisted he remove all mention of my work and put in dark matter! To his credit he emailed me instead. I suggested he submit to the J. of the British Interplanetary Society, which was at that time open minded, & it was published. Travis is Carl Sagan's ideal: both seriously competent and open minded, but the skill I most appreciate in him is making theories practically testable. In the aforementioned paper he pointed out that quantised inertia predicts that an emdrive based on visible light would work far better. His paper made QI more testable & DARPA contacted me shortly afterwards. His paper: Link

Jesus Lucio. When I received DARPA funding I advertised for a post-doc. If I'd received no applications it might have gone south, but luckily I received one: Dr Jesus Lucio. I really was saved by Jesus, and since then he has worked brilliantly, not only developing the cavity thrust model required, but adding a capability to optimise the cavity shape, in real time on the screen, and helping me with papers - particularly models and graphics. It is a shame that covid lockdown has ended our chats over coffee since I regard him now as a friend as well as a colleague and, sadly for me, he goes back to Spain next month. Our first published collaboration is: Link

There are many more people that I want to thank in future, such as M. Renda (who wrote the first serious criticism of QI - very useful to me), Z. Komala (who has been doing ingenious QI experiments) and others, but the four above make a nicely closed story for today. I will write another of these thank yous soon. I mean it: Thank you!
Posted by Mike McCulloch at 04:36 No comments: