Someone recently asked me to explain quantised inertia in a series of four drawings. I am probably overfond of brevity, so here it is in one drawing, but also with an explanation of how quantised inertia really does reunify physics in a new, beautifully simple and useful way.

Quantised inertia (Qi) deals with the property of inertial mass, for a long time, in my opinion, the blind spot of physics. The figure below shows a ball (black circle) accelerated to the left (red arrow) and also shows Heisenberg's uncertainty principle which states that for an quantum object, its uncertainty of position (dx) times its uncertainty in momentum (dp) must be equal to or greater than a constant (hbar, a very small number). Now we introduce relativity which says that information is limited to the speed of light and so information from a certain distance behind the ball in its acceleration can't catch up, so there is a unknowable zone to the right from the point of view of the ball. There is also an unknown zone very far away since stars far off are moving away faster than light thanks to cosmic expansion. The result is the solid black line in the Figure, a horizon around the ball. If we now apply the uncertainty principle at each angle around the ball, then you get a value for the momentum uncertainty at each angle that is a mirror image of the position uncertainty. The uncertainty in momentum around the ball is shown by the dashed shape. This schematic is only two dimensional, the actual shapes will be twin-lobed and will looked more like an egg-timer. 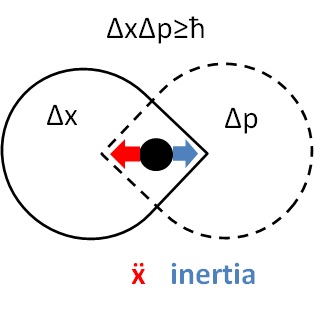 The dashed shape means that in the opposite direction to the acceleration, the ball's uncertainty of momentum is higher and therefore there is more of a chance that quantum fluctuations will push the ball backwards against its acceleration, in this case to the right, and this predicts the inertial force we know and love (the blue arrow) which keeps our balls traveling in straight lines on pool tables (see the 1st paper below for details). Any deviation is cancelled by this combination of relativity and quantum mechanics (called quantised inertia).

Quantised inertia also predicts something new: that if the acceleration is very low, then the solid-lined shape starts to expand to the right, becoming more circular and at very low accelerations it is just a circle (sphere). So the momentum (dashed) shape is also a circle and symmetrical on both sides, and so it is equally likely that quantum fluctuations will push the ball in any direction and so the inertial mass disappears in a new way at low accelerations in this model. Qi happens to predict galaxy rotation precisely, and without dark matter, since the inertia mass and centrifugal force on slowly-accelerating galactic edge stars is lower than expected (see the 2nd reference below).

Quantised inertia also predicts that if we could shrink the dx envelope (solid-lined shape) in one direction by making our own horizon there, then because of the uncertainty principle the momentum envelope (dashed-lined shape) would expand in the opposite direction. What does this mean? It means things would move in a new manner in that direction. This is what I think is happening in the emdrive. In fact the emdrive looks very much like the solid-lined shape, so Qi predicts it should move towards its narrow end, and it does! It does so by the amount, well, in most cases, predicted by a crude application of quantised inertia.

There you go: physics reunified in at least one way, simply, dark matter gone and a new reaction-mass-less propulsion method. What's the catch? Well, more direct experimental evidence is needed, and a full mathematical structure needs to be worked on: there's lots of scope for people to join in.