Imagine you are in a little rowing boat, rowing round an island and you notice that your boat always gets washed towards the shore. There is no surprise, since there are likely to be more ocean waves hitting you from the open sea than from the direction of the island.

On a not entirely unrelated subject, many recent experiments (Pohl, 2010, 2016) have shown that muons (heavy electrons) in a close orbit around the proton in so-called 'muonic hydrogen' appear to be bound to the proton a more than expected, a bit like the boat is to the island. This can also be interpreted as a 'proton radius anomaly' where the proton appears to have gone on a diet, and this is what this anomaly is usually called, but an extra binding energy can just as well explain the data. Both possibilities are far too big to be explained by the standard model of physics which has no mechanism by which the proton can go on a diet or suddenly become more attractive to muons (see previous blog).

So, to cut to the chase, can Unruh radiation explain it? I have found that it can explain roughly 55% of it. If you calculate how much Unruh radiation is seen by the orbiting muon and how much of that is blocked by the central proton, just like the island blocks waves from the point of view of the boat, then this predicts that more Unruh radiation hits the muon from outside the atom than from the centre, pushing the muon closer to the proton. The predicted extra binding energy is about 55% of the observed extra binding energy. The normal proton-electron atom does not show an anomaly because an electron orbits 200 times further out than the muon and so the solid angle of the central proton is tiny and the sheltering is negligible (see the reference below for details, McCulloch, 2017).

To go further, this attraction looks a little bit like gravity, which also tends to pull matter together. Wouldn't it be funny if Fatio / Le Sage were right about gravity after all, but instead of it being due to a sheltering of electromagnetic radiation, which has been falsified, it is due to a sheltering of Unruh radiation by protons?

I recently saw an episode of Friends (The One Where Heckles Dies). It amused me because the character Phoebe declares "Gravity seems to be to be not so much pulling me down, as pushing". Maybe the writers here had something, and although Phoebe should listen to Ross about the solid evidence for evolution, her 'scientific arrogance' speech later on in the episode was brilliant: "There was a time when the greatest minds on the planet thought that the world was flat! Are you telling me that there is not the slightest chance that you might be wrong about this?". A plea for humility that is much needed in physics.

Evidence from galaxies and all other low acceleration systems shows something big and deep is rotten in the state of physics. I've managed to show that quantised inertia can clear up some of the mess. What about gravity? It has never sat well with quantum mechanics. In my recent (2016) EPL paper I managed to derive part of gravity as well as quantised inertia from the uncertainty principle. This proton radius anomaly might represent a better line of attack since, as I always prefer, there is some direct data to show the way.

The core of MiHsC / quantised inertia / horizon mechanics*, is the idea that the property known for centuries as inertia is caused by an asymmetry in Unruh radiation (an asymmetric Casimir effect). I have already discussed the evidence for Unruh radiation itself here (Fulling-Davies-Unruh radiation), and how quantised inertia (introduced here) predicts galaxy rotation exactly, and cosmic acceleration, without any dark stuff, but many people have asked how can a process based on the zero point field, so weak in the Casimir effect, could have such a large effect on matter that it produces inertia. How can it be?

Well, it can be. This can be shown with simple maths and the schematic below. The black circle is a Planck mass. Let us say that for some reason it is accelerating to the left (purple arrow), so a combination of quantum mechanics and relativity says that it sees a warm bath of Unruh radiation (orange colour). Relativity then says that information from far to the right (from the black zone) is limited to the speed of light and so cannot reach the mass, so this is its 'unknowable space'. A Rindler horizon forms to separate that space from the known space. Now as far as the mass is concerned, there is no space beyond the horizon and waves need space to wiggle in. So this horizon damps the Unruh waves on the right, creating a colder Unruh bath there (blue area). The gradient in the Unruh radiation means that more thermal energy bangs into the Planck mass from the left than from the right and so it is pushed back against its initial acceleration. Another way to think about this is that energy is now extractable from the difference in (virtual) heat. 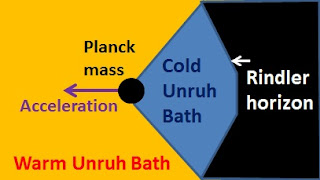 Maths helps us to be specific. The wavelength (L) of the Unruh radiation seen by a mass of acceleration 'a' is


The c is the speed of light, a huge number, so that the c^2 in the numerator makes the Unruh wavelength usually very long. A sperm whale falling in Earth's gravity would see Unruh waves a lightyear long, but probably wouldn't last long enough (a year) to measure one passing by. The energy in the Unruh field on the left is then

The energy in the Unruh field on the right is

Using normal physics, the force on the mass is the energy gradient from left to right across the diameter of the mass

This looks suspiciously like Newton's second law: F=ma, and suggests that m=h/8cd


For a Planck mass d is the Planck length so the predicted mass is m=1.7x10^-8 kg. The accepted Planck mass is 2.2x10^-8 kg. In other words, at least in this case of the Planck mass, the Unruh effect is strong enough to produce inertia. It predicts the accepted numbers quite well even in this simple analysis which leaves out a lot of detail. As I said in my 2013 paper on this (see below): to make this process work for larger particles, you can't just put in a larger diameter d. You have to add up the effect of each Planck mass.

A Taste of Kafka

Well, before I start I should say that most journals I have dealt with have been fair, but I'm having a bad month it seems, and every so often one is entitled to a rant. It's therapeutic for me and I think it is illuminating, maybe, for people to see the agonizing effort I'm making to try and squeeze my papers through peer review.

I've written a paper that gives good observational evidence that quantised inertia / MiHsC models 153 galaxies in the SPARC dataset without dark matter and without any adjustment of any kind. I've discussed this comparison on this blog too. I've submitted the paper on it to four journals so far. I've just received this frustrating reply from the editor of the 4th one:

I am writing to you with regard to your manuscript cited above, which you recently submitted to the (name of journal)


In case you are waiting for the scientific reason, that is the end of the message! This isn't the only meaningless response I've had in my career but surely science can do better! The whole point of science is that an empirical, or at least rational, reason has to be given for decisions. The Royal Society decided in about 1600 that science worked better this way. Otherwise, instead of rational progress you get hidden elites deciding whatever they want in their own interests. Recently, as I have written papers that show more and more clearly that quantised inertia works far better than dark matter, I have increasingly received vague responses like this. The editor clearly is unable to find any fault with quantised inertia, and yet is unwilling to even consider it. Why? I don't mind being rejected for a rational reason, but I get a mediaeval or Kafkaesque chill when my papers are rejected for no reason at all.

My reply to the editor was:

You have to give a reason, since you represent a scientific journal.

No response. If you have any advice on which journal I can next submit myself to, please let me know. Readers Digest? I always wanted to submit there..
Posted by Mike McCulloch at 15:19 35 comments:

In the past I've presented many comparisons between quantised inertia (MiHsC, horizon mechanics) and the emdrive thrust data, and here is another one (see the graph below) updated with the new NASA 2016 data (White et al., 2016). The ten comparisons between the thrust predicted by MiHsC/QI (this way) along the x axis, and the thrust experimentally observed, along the y axis, are shown by the open squares. Ideally, they should all lie on the diagonal line, and they are close to it, but you'll notice that the NASA thrusts (NASA2014 and NASA2016) are overestimated (too far to the right ) by anything up to a factor of ten (the scales are logarithmic), and Shawyer's first test (Shawyer1) is too far to the left. 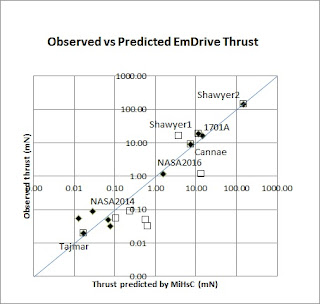 I wondered (see the NASA shift) if it could be because NASA put a thin dielectric at the narrow end of their emdrives (Paul March confirmed they did), and Shawyer put a dielectric at the wide end of his first emdrive (Shawyer1). So I have now calculated the change this makes to MiHsC/QI since a dielectric changes the speed of light. The amended thrusts are shown on the plot with the black diamonds, and they lie closer to the diagonal 'correct' line, which is encouraging and some evidence that MiHsC/QI is the right explanation (but let's see if the reviewers of my new paper, to be submitted, agree with the way I've calculated the effect of the dielectric). Here is the same data in table format: 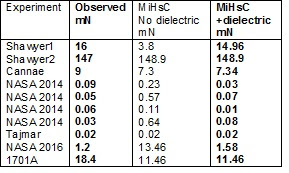 I'm also very grateful that, just before Christmas, Professor Igor Kaporin of the Russian Academy of Science, Moscow, told me he'd taken equation 14 from my paper (see the first reference below), which predicts the emdrive thrust, and optimised it to predict the emdrive shape likely to give maximum thrust. It is silly I didn't do that, since I've done it many times in other contexts (eg: least squares matrix algebra) and it is quite easy to do. You differentiate the MiHsC thrust equation (eq. 14) with respect to L and set the result equal to zero and what comes out after a few lines of algebra is that the maximum thrust occurs when L=4*(ws*wb)^0.5, where L = cavity length, wb & ws are the big and small end widths. I should point out that eq. 14 is approximate and doesn't include the effects of cut-offs within the cavity or the effect of dielectrics, but I will publish the dielectric-capable formula soon, and I will be sure to optimise this time!