Glimpses of QI in the Lab?

Starting in mid-June, Richard Arundal and I have completed 45 experiments, charging up capacitors 4x4 cm in area with either kapton or Polyethylene dielectrics between the plates. We have been carefully eliminating pesky artifacts, through trial and error, along with the appropriate amount of engineering, er, 'jargon', and taking readings with increasing accuracy. Here I summarise the cleanest data we have so far. The plot below shows the change in thrust up the y axis (a positive value is always a thrust towards the capacitor's anode) for eight runs. As we increase the voltage and move along the x axis, each point represents the weight change we saw (in grams) when we stepped the Voltage up by 100V. QI predicts that when we reach somewhere around the breakdown voltage for the capacitor, which is very uncertain but may be around 1 kV for the thin kapton and 1.5 kV for the thicker polyethylene, there should be a thrust towards the anode, ie: a shift up on the graph. 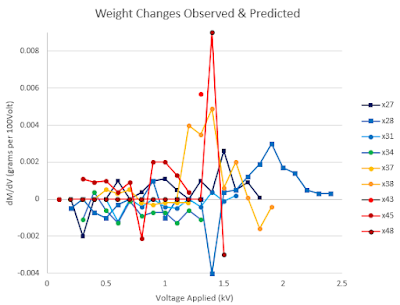 The first two cases shown: x27 and x28 (blue squares) used the polyethylene dielectric (30 micron). In plain English this means 'the plastic from plastic bags', and QI predicts (McCulloch, 2021) that the thrust should be

The other runs show the 7 micron kapton dielectric runs (blue-red circles). Those that do show a positive peak: x38, x43 and maybe x45 show it at 1-1.3 kV which fits because these capacitors are thinner and should break down at lower voltage. From the equation above, the kapton should produce 0.046 grams/100V and that is close to what we saw. The faint box represents the area I expect for the QI thrust. It is uncertain in the x direction as the quoted breakdown voltages of dielectrics have a large range.

One problem remaining is that we do not yet have a perfect example of turning the capacitor over and getting a reverse thrust. We can maybe see that in x37, x45 and especially x48 which were reversed but the peaks are small and these runs were not very clean (x45 was drifting well before 0.1kV was reached). x48 gave us a sustained peak at the right time, but there was a brief glitch while powering up.

In summary, we have a few positive peaks which are encouraging. So is the fact that the kapton runs show both a lower break down voltage and a higher thrust than the polyethylene. Are these peaks due to QI? If so, the world has changed, but time will tell. We need a good clean reversal of force. Richard Arundal has been excellent - he is a skilled engineer who does not give up. Please go and see his youtube channel linked below. The last six weeks have been a roller coaster, but with a slow geological scale uplift.