The NASA paper further supporting the previous emdrive experiments (in which a microwave-filled conical cavity moves towards its narrow end without expelling anything, as standard physics says it just shouldn't do) has finally been published. Apparently Eagleworks had a terrible time publishing it, so well done to them.

It is interesting that all the NASA results are anomalous in comparison with results from the other teams: Shawyer's, the Cannae group and Tajmar's. The plot below shows the thrust predicted by quantised inertia (MiHsC) on the x axis, and the y axis shows the thrusts observed in the lab. It would be great if all the diamonds representing the different emdrive experiments were along the diagonal line (a perfect agreement). The Shawyer, Cannae and Tajmar experiments are, but the NASA experiments are all shifted rightwards. This shows that MiHsC over-predicts the thrust for NASA's tests by a factor that can be as much as ten. 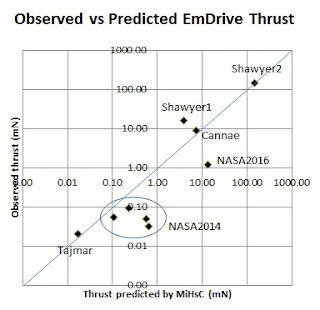 I may have an explanation for this. MiHsC predicts the emdrive's thrust by saying that the inertia of the microwave photons is caused by Unruh radiation (a radiation you only see if you accelerate). At the wide end of the cavity more Unruh wavelengths fit within, and are 'allowed', due to the bigger space available, but at the narrow confined end fewer are allowed (as for the Casimir effect). Thus, MiHsC is continually shifting the photons' collective centre of mass towards the wide end so that to conserve momentum the cavity has to shift the other way, as indeed it does, but more slowly as it is far more massive than the microwaves (more detail).

I've already worked out some of the maths for dielectrics, after I read an interesting, but inconclusive, 2016 report by a group at CalPoly (Kraft and Zeller, 2016) who tested a cylindrical emdrive with a dielectric at one end. I just need to account now for both a dielectric and taper and see if the numbers fit the NASA shift.

Experiments with balls: the mystery of big G

I've written a few blogs of late, showing how quantised inertia (MiHsC) predicts galaxy rotation and other things perfectly without adjustment, but to avoid sounding like a advert I also want to talk about the new things I am puzzling over. So this blog entry will be a bit messier, but perhaps more fruitful.

I've mentioned before that the gravitational constant (big G) is in trouble. Well, it still is. I recently read an interesting paper on this by Norbert Klein (see references) who analysed two of the recent experiments to measure big G in light of the galaxy rotation problem. The experiments typically measure G using a development of the Cavendish experiment. For example Quinn and Speake (2014) suspended four 1.2kg masses arranged in a circle radius 120mm (see the 4 small balls in the diagram below) from a fibre (the vertical line) and then put four much larger masses (11 kg) on a 214 mm radius circle around them, and then rotated this outer circle by 18.9 degrees so that the tiny gravitational force between the four pairs of masses twists the inner arrangement, so that they can work out from the twist what the force is. Since they know the masses M and m, the force F and the distance (r) very well they can work out G from Newton's gravity law: F=GMm/r^2. 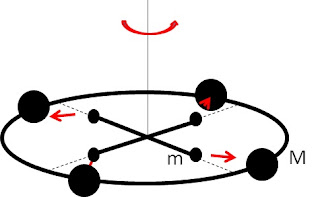 The trouble is that the two different values of G they found disagree by more than the uncertainty in the experiments! Which they just can't do, unless something 'unknown' is going on. Schlamminger measured G=6.674252x10^-11 m^3kg^-1s^-2 and Quinn and Speake found G=6.67545x10^-11 m^3kg^-1s^-2. The observation that got me excited was that Norbert Klein, in his paper, points out that in the Schlamminger experiment (the low G value) the gravitational acceleration between the two balls (if they'd be free to move) was relatively high, but in Quinn and Speake's experiment (the high G value) it was very low.

This agrees with quantised inertia since a low acceleration should mean the small ball has lower inertial mass and so is more sensitive to the large ball, so it should 'appear' that G is bigger, as indeed Quinn and Speake found. I have done a rough calculation assuming the mutual acceleration is four times the gravitational acceleration between each pair of balls (there are four pairs), and quantised inertia predicts that the apparent change in G divided by G (dG/G) should be 11.3x10^-4 whereas Quinn and Speake measured a change from the standard value of G of dG/G=3x10^-4.

The prediction is a factor of 3.8 out, but there are large uncertainties in the calculation. For example, what is the correct acceleration to plug into MiHsC/QI? Is it, as I have assumed, the along-inner-circle component of the acceleration that the small mass would have towards the bigger one, times four? Does the rest of the environment contribute? How about the curve of the ball around its circle as it moves? That is an acceleration too. Also, what is the 'raw' value of G, that MiHsC/QI predicts should only be seen at high accelerations? This affects dG. It's something interesting to think about anyway.


My family must think I'm training for a boxing match since I can often be found these days walking round the house holding my fists up to represent two balls and mumbling to myself.. Saying that, maybe I should learn to box: given some of the online responses to MiHsC/QI, if I ever attend another conference, such a skill might be needed!

People have been sending me Verlinde's new emergent gravity paper wanting me to comment on it. I started reading it and I'm afraid I stopped at the sentence 'code subspace in microscopic bulk Hilbert space'. I skimmed the rest. He focuses on gravity, and just assumes inertia, and is proposing a new force that starts to appear at large scales. Although there are similarities to MiHsC in that he uses the Unruh temperature formula and information, there are many observations that falsify Emergent Gravity:

1) Emergent gravity predicts an anomalous effect that occurs only on large scales, and so it is falsified by the many tiny globular clusters and small satellite galaxies that show even more of an anomalous rotation effect than big galaxies (MiHsC is successful with these minnows too because it predicts anomalies at low accelerations, instead of just large scales, see paper). Emergent Gravity also cannot deal with many other anomalies like the cosmic acceleration, the flybys and the emdrive. MiHsC explains all of these.

2) Entropic gravity has been falsified by a detailed comparison with galaxy rotation curves: https://arxiv.org/abs/1609.05917 (Lelli et al., 2017, to be published in MNRAS letters).

3) Emergent Gravity has been falsified by experiments in which uncharged neutrons were confined in the vertical direction by making them bounce off a mirror below, and allowing gravity to pull them down. It was found that, in agreement with quantum mechanics, the neutrons did not move continuously along the vertical direction, but jumped from height to height like mountain goats. Entropic gravity predicts the wrong heights (see the Kobakhidze reference).

4) Emergent Gravity relies on something called code subspace, which is something we cannot directly see, so it is another kind of informational dark matter that is difficult to test for directly.

It is strange people that people are considering Emergent Gravity and are not discussing MiHsC / quantised inertia which is far simpler, requires less new physics, is based only on observable things, and predicts far more. To summarise:

1. MiHsC/quantised inertia is deliberately based only on things we can see (empiricism): visible matter, the speed of light, the cosmic diameter, and Unruh radiation that was already predicted and is at least observable, and may have been seen already (Unruh confirmed?).

2. MiHsC is simple. Emergent gravity is complex and Byzantine, and needs more untestable assumptions (like code subspace) than you can shake Occam's razor at, MiHsC needs only one new assumption and 6 lines of maths to predict galaxy rotation and many more anomalies on a huge range of scales.

3. The new assumption in MiHsC: that quantum mechanics (the zero point field) and relativity (horizons) interact on all scales via the uncertainty principle simply gets rid of the dark sector and unifies physics.

4. The same mathematics that leads to MiHsC, also predicts gravity, so MiHsC predict both gravity and inertia.

5. MiHsC predicts the many anomalies that have been seen in recent years (29 or so of them), but also makes very specific predictions for new things that can be looked for (eg: early galaxies span faster at the same visible mass, the emdrive can reverse if you change its aspect ratio..)

Of course, it's good that Verlinde is at least trying to solve galaxy rotation without vague dark matter, but he is still suffering from the excess-baggage problem of theoretical physics. He had to start from general relativity and try to add invisible elements to it. The result is complex, contrived and doesn't fit the data.

Quantised inertia / MiHsC fits the data, and is far simpler because you don't have to add anything unobservable. All you have to do is admit that quantum mechanics and relativity interact via horizons and the uncertainty principle (summary).

Kobakhidze, A., 2011. Once again gravity is not an entropic force. arXiv

Just for fun I've just written this, based on Leonard Cohen's song "Hallelujah", but with a science/MiHsC theme.

Thales of Miletus, in Ancient Greece
said the Gods were not the keys
and we should only assume things we can see, yeah.
Putting data first
gave us gravity
and Einstein's relativity.
Humanity was rising towards the stars with Hallowed Data.

Their faith was strong, but they needed bread.
They went for funding, lost their head.
The beauty, & the aura, overthrew them.
She tied them up
in darkness then
and broke Occam's razor, when
they threw out that essential hallowed data.

They say I aspire far too high
but I just want to pierce the sky,
and if I did, well really, what's it to you?
MiHsC was born
outside the herd.
It doesn't matter what you heard.
It's simply and surely based on Hallowed data.

I did my best, it wasn't much.
I couldn't join, but I tried to push.
I've told the truth, I didn't come to fool you.
And even though
I'm on the edge
I'll stand before the garden hedge,
with nothing on my tongue but Hallowed data.