Last Thursday I presented a talk at a "Gravity beyond Einstein" workshop at the Institute of Physics in London. First of all, the fact that the IoP's Gravity Group set up this workshop shows that they are open to new ideas, which is great. There were also many talented young physicists there, who I think only lacked the freedom to create, which means the freedom the "break" things, if justified. The impression I got was that the other speakers were trying to get beyond Einstein by bending his field equations using extra terms, tensors & dimensions, but without breaking anything. The resulting theories were full of adjustable parameters, like Ptolemy's epicycles.

Einstein was aware that general relativity (GR) was not the final word (see Surely You're Joking Mr Feynman, page 80, lines 12-14). He spent his last years trying to replace it, but was working without the help of the 'anomalies' (experimental signposts) that he had had before for special relativity (the Michelson-Morley experiment) and quantum mechanics (Lenard's photoelectric experiment). The relevant clues for the next generation theory: the galaxy rotation problem, the supernova data and spacecraft trajectories, only appeared much later in the 1970s, 1980s & 1990s and the replacement of machine-based thinking with information technology has occured recently too. GR is still rather entrenched, but all theories are flawed. They are like mathematical cartoons of nature, not the thing itself, and theorists sometimes forget that.

I think my attitude is better. In my talk I started from an anomalous observation: the galaxy rotation problem, tested a simple new physical principle that has no adjustable parameters (MiHsC) on this problem, obtained good agreement and made further predictions that can be tested.

It is time we had the confidence to replace GR, and that cannot be done by bending it, it must be done at a deeper level. I think MiHsC (quantised inertia) is a step towards that because, to summarise: it agrees with the data without adjustable parameters, it is simple, it makes predictions from parameters that can be fairly directly observed like baryonic matter, the speed of light and the Hubble scale rather than things that cannot be directly observed like dark matter, curved space and extra dimensions, and rather than the old machine-based physics, it points towards a new way of thinking based on information.

For further details see: http://arxiv.org/abs/1207.7007 (Published in Astrophysics and Space Science, online early) and a more accessible account of it is here.
Posted by Mike McCulloch at 13:40 No comments:

Someone helpfully suggested that I should redo the Figure that I published in this paper (in Astrophysics and Space Science) using a vertical log scale, and the result is much clearer and is shown below. This Figure shows the baryonic mass of the astronomical system in Solar masses along the x axis, from the light dwarf galaxies, through gas discs and spiral galaxies and up to galaxy clusters. The vertical log axis shows the rotation speed of the system in km/s. The black circles are the observations (from McGaugh et al., 2010). 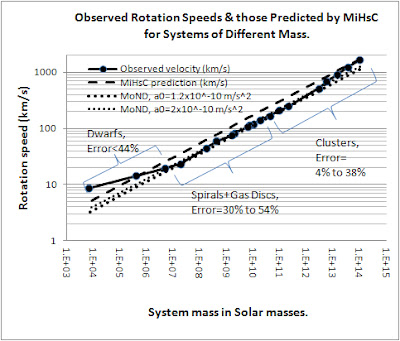 MoND predicts the two dotted lines, but to do this you must "tune" its adjustable parameter (a0) by hand to be 1.2x10^-10 m/s^2 or 2x10^-10 m/s^2. Quantised inertia (MiHsC) predicts the dashed line without any adjustable parameters. See here or the preprint for more details. So both MoND and MiHsC agree with the data within its uncertainty but MoND has to be "tuned" to fit, whereas MiHsC works as it is.
Posted by Mike McCulloch at 02:28 No comments: