I’ve published a paper showing mathematically how MiHsC predicts the emdrive (see the reference below), but the struggle is to convince people with an explanation that takes them from what’s known & solid and guides them into this new area. This is one of the, possibly flawed, ways I use to explain it to myself. Starting from the known: the Casimir effect is well tested (see below left). If you put two conducting plates (the black lines) close together, these damp the zero point field (orange wiggles) between them, more virtual particles hit the plates from outside then from inside & the plates move together (red arrows).

It has also been noted, this time in fluid dynamics that if you subject a boomerang-shape to random perturbations (the middle diagram above) then it also has a shadow-zone for waves between its arms, and in this case the waves push it rightwards, since the waves put inwards (and rightwards) on the arms, but there are no waves to push from inside out (and leftwards) (eg: Chakrabarty et al., 2013). Now, imagine the reverse, where you have the same boomerang shape, but the random field is more intense inside (see the right hand diagram above). This is like the emdrive whose internal em field is high. By symmetry, the boomerang now moves towards its narrow end. We’re getting close.

The MiHsC explanation of emdrive is in a similar line but the derivation is more difficult because there’s no open end now. MiHsC says that the zero point field can be made to vary in space by setting up horizons (these can be real Casimir plates or abstract information horizons). In the emdrive then the supercharged zero point field in the copper cone is more energetic at the wide end (see diagram below, note the waveforms shown are cartoons only). There is now a gradient in it from which work can be extracted, just as the Casimir effect gets energy to move from the gradient it creates in the zero point field.

One way to work out the effect of MiHsC on the emdrive is to consider the photons resonating within it. On moving towards the wide end of the cone, the photons are moving to a more energetic zero point field and so gain inertial mass due to MiHsC (yes, light has inertial mass, the Japanese have just tested a light sail: IKAROS). Going the other way the photons lose mass. The almighty cosmic accountant says "Oh dear! Net mass is going towards the right, so I'd better conserve momentum & move the emdrive to the left. Make it so!". In this new way MiHsC predicts the observed emdrive thrust quite well. As shown in the bar chart below which shows the thrust data (the purple bars) from the eight emdrive experiments so far, and the MiHsC prediction in red. For the details, see my paper below. 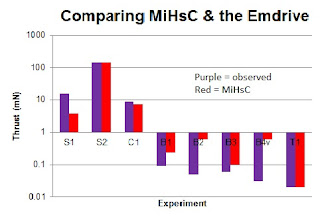 The LIGO project is a bit like a rich man's Michelson-Morley experiment. To simplify the explanation, they fire a laser beam into the centre of the contraption, which splits the beam sending it down two perpendicular 4km arms to mirrors. The beams bounce back to the centre and are redirected to a detector which checks to see if the peaks and troughs of the light waves are still aligned. Last week LIGO announced that the emerging waves were very very slightly not aligned, implying that the difference in the two arms' lengths had varied by 0.0001 times the width of a proton in a way that looked like the gravitational waves predicted by general relativity (GR) due to two black holes merging.

I've been asked whether this is relevant to MiHsC. The answer is that if it really is from a high acceleration distant process then 'no' since MiHsC usually only makes a difference to GR at very low accelerations or large scales (of the order of 10^-10 m/s^2, or tens of kpc), and at higher accelerations MiHsC reduces to general relativity since in that regime the MiHsC inertial mass tends towards the gravitational mass (if it's due to local changes in light speed, then it might be relevant).

The search for new data is a fantastic thing, so LIGO should be congratulated for that. The thing that bothers me about the gravitational wave paper is whether the twin black-hole merger scenario they pigeon-holed it with can be falsified or tested independently? I suspect it can't, and so this is like a lot of post-modern physics: unfalsifiable.

Imagine someone invents a Theory of Exploding Mushrooms (TEM). They have brilliant success predicting small mushroom blasts at home. Then people using ear-horns hear odd bangs from the distant forest. "It's my theory of exploding mushrooms!", the scientist says in glee and enthusiastically calculates the size of the unseen mushrooms that may be exploding. No one can go to check this prediction, and some people grumble that with the greatest respect, the TEM actually only managed to predict 4% of the exploding mushrooms that have subsequently been seen on the edge of the forest, and also the theory is incompatible with the famous Theory of Quantum Fungi...

In the gravity wave paper (see below) they say that the merger and the 'ring down' of the black hole are consistent with each other given GR, but this is an example of fitting using a computer model. They have found the black hole model that fits the data, but no one can go and look. It is not falsifiable. So it is not science.

Carl Sagan once said: extraordinary claims need extraordinary evidence. This applies to this case. They are invoking extraordinary directly-invisible entities and this needs independent backup. I feel that the usual standards are not being applied to the pathway that the majority of physicists occupy.

I haven't posted here for a few weeks because I've been inundated preparing a new Space Exploration course for Plymouth University First Year Students. Today, after going through relativity and the philosophy of it, I finally gave the students (a good keen bunch) a presentation about my own work.

I started by pointing out the big problem, which has been brushed under the carpet, which is that galaxies spin too fast in their outer parts and the centrifugal forces should pull them apart. I mentioned the deeply unpleasant hypothesis of dark matter that is added to their edges to make general relativity fit the visible mass and velocity data. I added the interesting commonality which is that the problems always start at galactic radii when the stars go below an acceleration of around 10^-10 m/s^2 and the observation that globular clusters (star congregations within galaxies) show the same odd behaviour as large galaxies but dark matter can't be used to fix globulars because it has to stay spread out at the galactic edge to fix the galaxies.

I then showed how an object accelerating in one direction develops a Rindler horizon in the opposite direction and this damps the Unruh radiation in such a way that more radiation hits them from in front then from the back and how this predicts inertial mass for the first time (McCulloch, 2013). In the past it's always been assumed that "things keep going": shallow language only.

I then showed that this new model (MiHsC) predicts that inertia dissipates in a new way at very low accelerations in just the way needed to explain galaxy rotation without dark matter (McCulloch, 2012). The predicted effects also appear at that critical acceleration of 10^-10 m/s^2. MiHsC also predicts the recently observed cosmic acceleration without dark energy (McCulloch, 2007, 2010) and fits the low-l CMB anomaly and the pioneer and Tajmar anomalies, the emdrive & others. I then briefly went through Maxwell's Demon, Szilard's Engine and Landauer's principle and showed how I'm now attempting to re-derive MiHsC using information loss on horizons and how I can get similar formula, but with an as-yet too simple model.

Just when the students were recovering from this I showed them a swastika (no politics here) and told them that if this was put nanoscale into the zero point field then it would act like an array of Rindler horizons, and create new circular motion to generate energy. I showed them Luke's speeder on Tatooine and said all it needs is an Unruh-damping horizon above it to float, and a fuel-less interstellar vessel, with a horizon in front which should move getting its energy from the inhomogeneity in the zero point field caused by the horizon.

Some of the students said they were 'Blown away'. So it'll be a hard lecture to follow: my next lecture is on exploration by maths (what I do most of the time), then 'alien possibilities'. Anything short of presenting a stargate is going to be a dissapointment, but dissapointment too is an education: these things are not flash in the pan. It's a long hike, or should I say trek? It's now over 10 years since I started.