Does QI Predict The Woodward Effect?

James Woodward in the US has been boldly experimenting with capacitors which appear to show thrust since the 1990s. I was recently reading about one of them, and to me it looks very much like the emdrive. Also, as I will show tentatively below, the thrust from it can be predicted quite well by quantised inertia, in a far simpler way to Woodward's own explanation which mis-predicts the thrust by several orders of magnitude (ie: I admire his experiments, but I do not accept his theory).

Woodward's thrusters or Mach Effect Thrusters (see Mahood, 1999, Tajmar, 2017) typically look like the image below. An AC current is input into a capacitor (the vertical black lines) making an EM field. There is a dielectric in between (yellow) or sometimes to the side, which is a piezo-electric material (PZT) that vibrates when the EM field is applied. The setup is asymmetric because there is a heavy reaction mass (plate), here shown on the left. 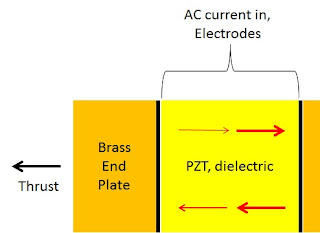 Quantised inertia predicts that this contraption should move towards the end with the large brass plate (just as it is observed to do) just as the emdrive moves towards its narrow end, because in both cases Unruh waves are more damped at the end with the massive plate, so photons of the em field will always gain mass on going towards the wide end or the end with less metal, and so, to conserve momentum, the thruster itself must thrust left. The above also looks similar to the horizon drive.

So, let's get a bit more quantitative. A simplified version of the QI thrust formula is

where F is the thrust towards the end with the massive plate, P is the power input, Q is the quality factor, L is the length and w1 and w2 are the 'widths' of the cavity at the two ends (which affects the amount of Unruh-damping). Now, how can we model exactly the damping of the Unruh waves by the two end caps' thickness? I cannot yet do it in detail, but one way to do it, to predict the maximum thrust obtainable would be to assume that the thin brass cap on the right does not damp the Unruh waves, so the photon can see the cosmos and w2 = the Hubble scale. The other end, being thicker, does damp the Unruh waves so the width (w1) there is roughly the distance between the centre of the dielectric and the middle of the brass end plate. The particular experiment I will look at is Mahood (1999) for which L=0.025m and P=145 W. To estimate Q, I have had to use the dissipation constant of 2% given for another thruster in a report by March and Palfreyman (2006). So Q=2pi x 100%/2% = 314. The thrust toward the large plate end is then predicted (in a very crude way) by QI to be


The observed thrust was 5x10^-5 N (Mahood, 1999) so the prediction by QI is not bad, and far better than Woodward's model which was several orders of magnitude out (according to Mahood, 1999). As expected from the assumptions, the QI prediction overestimates the thrust. This is obviously a very crude calculation, which is why I'm spouting it here, and not in a journal yet, but it is interesting that QI predicts this Mach Effect Thruster, and also of course the emdrive, galaxy rotation, cosmic acceleration...etc. The thruster may allow a new way to test QI, and could be an example of the horizon drive. I do need to look at the other thrusters because I believe some of them were not asymmetric, and build up a more statistically-significant results list for comparison with the predictions of QI.

I was recently invited by Prof. Dr. Dr. Lippert to give a talk about quantised inertia at his Computing Centre in Julich, Germany, and it has proved to be very stimulating. Most of mainstream physics is still in 'shunning' mode, so this was a great chance to talk to some highly-qualified physicists.

After my talk, I chatted with Prof Lippert and an astrophysicist. Their first comment was on precision. In my talk I showed three ways to derive QI. One using Unruh radiation, the second using the uncertainty principle and the third using information and Landauer's principle. There is a fourth thermodynamical way, but I skipped that. The point I was trying to make was that if there are four closely-related ways to derive QI it is a good thing - if all roads lead to the same place, then it is probably somewhere important, like Rome, and this indicates that there is a deeper, unifying, derivation. Prof Lippert made the good point that it would be better to present the best derivation only. 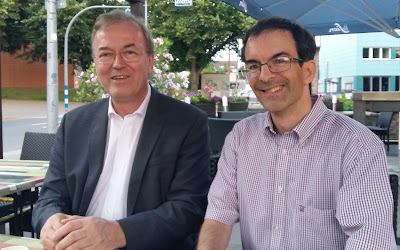 He also said that I should make the point more often that QI provides an explanation for MoND. MoND (Modified Newtonian Dynamics, devised by Moti Milgrom) is an empirical theory (an effective theory) that predicts galaxy rotations but has to use an adjustable constant (a0) to do it. QI predicts MoND behaviour without the adjustable constant, so QI provides a basis and a physical underlying reason for MoND. Instead of the free parameter a0, QI has the unadjustable '2c^2/cosmic_scale', where c is the speed of light, so QI predicts things that MoND cannot, for example: changes of galaxy rotation in the distant past when the 'cosmic scale' was smaller. Also QI can predict MoND but MoND cannot predict QI. Prof Lippert's point was that emphasising the connection to MoND means I can claim all the successes that MoND has had, and also gain allies among the MoNDians who might welcome a physical basis for it (but they may also get annoyed). The bridge here may be Prof McGaugh who has shown interest in QI but is doubtful that Unruh radiation is strong enough (I have shown it is here).

Another useful comment related to my simplified approach. For example, the spin of a solid object would produce a whole range of accelerations since the solid-body acceleration a=v^2/r changes with radius. So to properly model it I need to consider a whole family of Unruh spectra. That sounds like a job for a simulation, and Julich is the place for that. I was shown the supercomputer they have, an impressive setup capable of several Petaflops of processing power. Useful for galaxy modelling or modelling the interaction between Unruh waves and matter (QI) at a more detailed level.

The Julich, JSC is an impressive place. Situated in a beautiful forest, populated by about 6000 staff, several supercomputers, and with a physicists' cafe whose pizzas are all quantised. I wasn't allowed a slice, it was all or nothing. Planck would have loved it.

Vielen dank Prof. Dr. Dr. Lippert. I look forward to many collaborations with you in the future.

The abstract for my talk: Link

If you wish to support my work a little, you can do so here:
https://www.paypal.me/MikeMcCulloch
Posted by Mike McCulloch at 05:18 29 comments: