It seems, after several comments I've received, that the way MiHsC (may) work on the emdrive is easily misunderstood (including by me, so I've just rewritten this blog again!). Anyway, here is an attempt to clarify it and explain why I think you get a push consistently towards the narrow end from MiHsC and why, although new physics, it is at least perfectly self-consistent. This is based on the maths in my published paper (see the reference below).

Imagine a microwave photon bouncing from end to end of the emdrive cavity (see the diagram below). As the photon goes from the narrow end to the wide end (see the lower arrows) the number of allowed Unruh waves increases because of MiHsC (more are allowed on the right because the cavity is wider) so the photon's inertial mass increases (so the right hand arrow is thicker). This means that MiHsC has disturbed momentum conservation, which can only be satisfied by applying a leftwards force to slow the photon down (its speed is represented by the arrows' length). 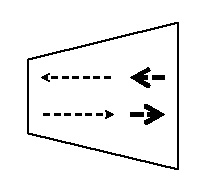 As the photon bounces off the right end plate and goes leftward again (upper arrows) it looses inertial mass by MiHsC (the upper left hand arrow is thinner) so the only way to satisfy momentum conservation is again to apply a leftward force to speed the photon up (the left hand arrow is longer). In both cases, to satisfy both MiHsC-induced mass changes and the conservation of momentum, a new force must appear towards the narrow end. Since the momentum at both ends is the same, the photon pressure on the end walls cancels (see this previous post). This new thrust predicted by MiHsC agrees quite well with the emdrive data (see the reference below).

A more lighthearted summary of MiHsC, occasionally veering into a Yorkshire accent:

Inertia means you coast along, no-one ever explained the why,
but when you accelerate, a horizon opens behind you as you fly.

The horizon's like a black hole's, so it gonna be damn hot.
You'll see Unruh-heat, if accelerating, but nowt at all if not.

Heat is waves, and MiHsC theory says: they must fit from you to the horizon
because partial waves would let you see behind Mach's forbidden curtain.

So from behind you, horizonward, there'll be fewer waves impacting
The waves in front'll push you back, just as inertia's long been acting

OK so far, but can MiHsC say why in deep space physics fails?
In that slow realm the waves are as long as Hubble's cosmic scales.

So there MiHsC disallows more waves and inertial mass collapses.
Quite a shock, but maybe welcome if you've 'et too many biscuits.

Galaxies spin so fast the centrifugal force should explode 'em all.
MiHsC reduces this inertial force just right: it's really on the ball.

Cosmic acceleration is predicted since before accelerations disappear,
the Unruh waves grow too long to fit into Hubble's sphere.

Dark matter is like Ptolemy's epicycles on steroids, by computer.
MiHsC works with just a few lines, on a piece of paper.