The articles that have appeared recently about MiHsC and the emdrive make a valid link with the flyby anomalies, but the clearest didactic link would be with the cosmic acceleration that MiHsC also predicts without the need for dark stuff. The following is a simplification for the purposes of explanation: 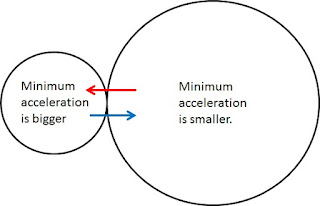 As an aside, the higher minimum acceleration predicted by MiHsC in the smaller universe, models a kind of inflation for the smaller early universe, as needed by cosmology to explain the flatness problem.
Posted by Mike McCulloch at 07:36

I'm still trying to wrap my head around a few aspects of MiHsC.

For example, assuming MiHsC, how large would the minimum acceleration have been around the time of recombination, 378,000 years after the Big Bang? How much smaller would inertial mass have been for any given particle, compared to today?

Have you already worked out how far back you would have to go before MiHsC's equations lead to some unexpected conclusion about the early universe, which standard physics doesn't describe?

And as a somewhat silly question - if someone wanted to write a science-fiction universe including MiHsC, can you think of any rough estimates of how efficient emdrive-like devices might become? :)


Thank you for your time.

just a joke.
if universe is a point, then minimum acceleration is infinite ?

you created the big bang.

DataPacRat: If at the time of recombination the redshift was 1100, the universe was about 1/1101 th the size it is now, and the minimum acceleration predicted by MiHsC is then 7x10^-7m/s^2 (so about a 1000 times bigger an effect than now). The drop in inertial mass due to MiHsC depends on the particle's mutual accelerations, but the drop in inertial mass would be 1000 times that of today for a given acceleration. It is necessary to be careful though, because changing inertia this way changes the past dynamics and size, and a proper model would be needed to look into it.

In my opinion the emdrive is only tickling the dragon, and a lot of mass-energy is there to be got out. Look at the size of dark energy (that MiHsC predicts). To get at it we need to learn how to put better horizons in the vacuum. In my view, what is mass-energy but the consequence of a horizon? Lots of scope for sci-fi there.

Alain: I get into trouble for everything! :) Luckily Heisenberg gets me off the hook, no points allowed. Planck's scale is a fine as we can go.