A shape is just a shape

I do not go looking for controversy, but the interesting areas that I get attracted to (anomalies) are often those areas where scientific taboos have put up warning signs. One example of breaking a different kind of taboo is the paper I have just published.

It all began at the end of 2004 when I went to South Korea and noticed that there were swastika signs next to the country roads. The swastika means Buddhist temple over there, proving that in some cases Bertrand Russell was right and 'Sin is geographical'. While Germany bans the swastika, Koreans associate it with Buddhism and peace. Travel broadens the mind, and we should remember that in physics, a shape is just a shape. Anyway, seeing all these signs, I had the idea for a new way of generating energy from ocean waves, using a swastika-rotor. This is illustrated by the Figure: 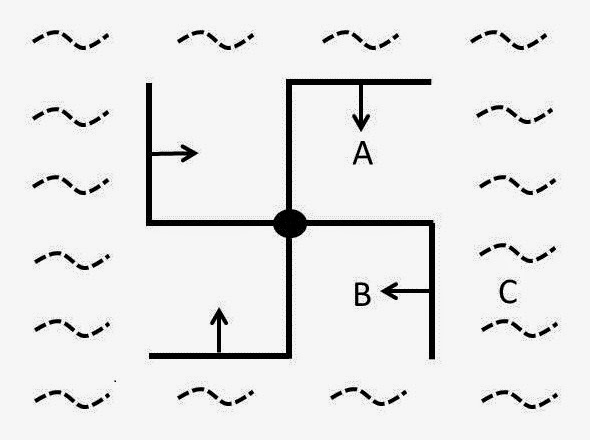 The swastika, or British fylfot if you wish, is centred on a axle (black circle) connected to a dynamo and sits in a random wave field. In the inner square areas (eg: A and B) there are fewer waves because of a sheltering effect, and because fewer wavelengths fit between the solid arms (to exist they need a node at the walls) so there is also a seiche effect. If we take the inner part of the southeast arm there is no net wave impact force on it because there are the same intensity of waves on both sides, but if we look at the outer part of the arm between areas B and C there are waves to the east of it banging into it and pushing it to the west, but no waves to the west of it pushing it east, so the net effect is a force (the arrow) pushing the arms of the swastika clockwise, and generating rotation and electricity with the dynamo.

This can be applied to ocean waves of course, but why not also to other kinds of waves or disturbances? For example: sound waves, Brownian motion and, last but definitely not least, the zero point field? Could we generate 'free' energy from the zpf this way? The rotors would have to be nano-scale though, so I don't see yet how this process could be scaled up..

After 8 years of procrastinating, and experiments with Lego, I wrote a paper and started submitting it to journals. I submitted it to three journals, and at all of them I had a long wait, and in each case the paper wasn't rejected, but it just never got reviewed so I had to withdraw it, and resubmit it to another journal. It was odd (I do wonder whether the politics stymied it?). Anyway, I have now published it in the fourth journal I sent it to (see the reference below). The next thing I intend to do is apply for funding to test this in Plymouth University's new wave tank and investigate the zpf angle theoretically.

Note the connection with MiHsC in that the arms of the shape are acting as a kind of horizon for the waves..

Another one for you Mike:

Combining General Relativity and Quantum Mechanics to make an argument against the 'big bang'. Also proposes an alternative to Dark Energy/Dark Matter.

Thanks, someone else send me this too. I do like their 'fuzzy' Bohmian approach to trajectories, but not their invention of a fluid (a invention to avoid a contradiction that makes things less falsifiable, Popper) & I'm wary of their approach of first trying to set right a distant theoretical problem rather than more solidly observed ones close to hand, eg: galaxy rotation. It's best to start with closer anomalies & work outwards. Thanks for the link. I'll read the paper in more detail to find out about these Bohm trajectories.

Discussion of this here:
Mike-

'Not Fritz Argelander' appears to be a former professional astrophysicist with mathematical expertise comparable to your own. You might find his take of interest.

I like Not-Fritz's comments pointing out the difference between general relativity & quantum mechs (the cost of information). To me the mismatch looks rather like the mismatch between Galilean relativity & Maxwell's equations that was explained by Einstein (with special relativity). QM is by far the more successful theory, like Maxwell's was back then.

im not really 'liking' this, seems to me the other side of the cavities will have the same imbalance. I dont think the 'restricted' angles that waves can approach from that side, due to the next cavities walls, will reduce force from that side, because i think some of the missing wider angle waves will ADD to the pressure by not being present to destructively interfere, and that will give the same pressure from that side as the opposite 'open' side, so yes imbalance inside/outside the cavities side to side, the "Casimir effect", but the same on opposite sides.

The point I'm making is not that the arms are stopping the waves getting into the enclosed areas, but that fewer waves can exist in the enclosed areas because of a seiche like effect (only whole waves fit). Hope that helps..

A similar machine was first proposed in 1912 by the Polish physicist Marian Smoluchowski. In his thought experiment, he suggested that tiny moving particles could generate enough force to spin a windmill-type paddle. A locking mechanism such as a pawl could prevent backward motion, forcing the wheel to move in the forward direction only.

Before some time I presented idea, that the breatharians could also harness thermal fluctuations through utilization of ATP synthase ratchets. In this extent it may be significant that the breatharians use to absorb the "cosmic energy" at the evening and early morning, where the energy of vacuum fluctuations gains maximum due to gravitational shadowing of longitudinal waves at the connection line of Sun and Earth.

Maybe you'll find some inspiration for your own theory from this insight...