While I do believe, cautiously, that the thrust Shawyer found in the emdrive is real (emdrive: a microwave oven shaped as a truncated cone) and that Shawyer and then Juan et al & NASA should be respected for finding and testing it respectively, I'd like here to criticise Shawyer's theory of it, which I believe is confused. I'll try to do this in an accessible way, and briefly discuss my alternative MiHsC explanation.

In a New Scientist article on the emdrive Shawyer said: "Key is the fact that the diameter of a tubular cavity alters the path - and hence the effective velocity - of the microwaves travelling through it. Microwaves moving along a relatively wide tube follow a more or less uninterrupted path from end to end, while microwaves in a narrow tube move along it by reflecting off the walls. The narrower the tube gets, the more the microwaves get reflected and the slower their effective velocity along the tube becomes. Shawyer calculates the microwaves striking the end wall at the narrow end of his cavity will transfer less momentum to the cavity than those striking the wider end (see Diagram). The result is a net force that pushes the cavity in one direction. And that's it, Shawyer says." (from New Scientist: the end of wings and wheels).

I think there is a lot wrong with Shawyer's explanation, and for once I'm not alone on this! For example he uses special relativity for an accelerating system and his explanation wrongly indicates a thrust towards the wide end of the cavity, but I'll focus here on the asymmetry in force he claims to exist between the large end plate and the small. I haven't seen an accessible refutation of this, so here goes. Referring to the quote above, he does not seem to consider that the photons 'reflecting off the side walls' will exert a pressure force on those walls, which will have a component towards the narrow end. The schematic below shows a simplified setup for ease of explanation: first of all an equilateral triangle which can be generalised to a 3-d cone by an integration using a rotation around the central axis of symmetry (the horizontal line) without changing the conclusions, so this is a nice accessible way to do it. 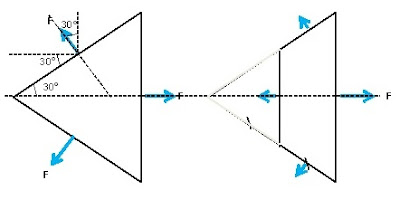 In the diagram on the left the microwave photons bouncing around inside the cavity make a force (F, per unit area) that pushes outwards on all three faces equally (the blue arrows). Assuming that the length of the sides are equal (l) it's easy to show that the left-right components of force balance:

In the diagram on the right I've truncated the triangle/cone halfway down its sides to represent the truncated cone of the emdrive, and again the result can be generalised to a 3-d emdrive by integrating things in rotation around the axis of symmetry (dashed line) without changing the conclusion. So now we have:

Again the forces balance in contradiction to what Shawyer said in his interview (which may have been an over-simplification on his part that he needs to address). This, and his use of special relativity for an accelerating system, and the wrong direction of his predicted thrust indicates that his theory is confused.

I have suggested an alternative, which is perhaps less confused, but requires new physics. The schematic below represents the MiHsC explanation of the emdrive. The brighter colours on the right are meant to indicate that more modes of the zero point field can exist at the right hand, wider, end of the cavity. That means that the mechanism MiHsC uses to produce inertial mass from an asymmetry in Unruh radiation caused by a Rindler horizon (an asymmetric Casimir effect, see McCulloch, 2013) is more effective on the right hand side. So, as photons go right (lower arrow) they gain inertial mass (arrow thickness) and as they go left they lose it (upper arrow), so to conserve overall momentum the cavity is predicted to move left (left hand arrow). The predictions from MiHsC fit the data, reasonably well (see McCulloch, 2015), but not yet such good agreement that I'm writing to Nature about it.. 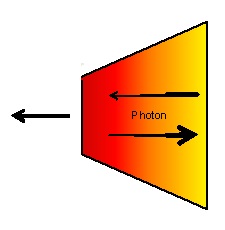 Mike, I love coming to your site, but the white text on black background is painful. Any chance you could go to a more traditional color scheme?

That was fast on the color change :) I had to use Readability extension before to avoid eye implosion. It looks like this with it: http://i.imgur.com/j4s6VBx.png
--
On topic question: how does the photons interact with the zpf? Do they do it constantly (as it was suggested with high energy gamma rays interact with the quantum foam) or when they occasionally bounce?

Tibor: Re: photons interacting with the zpf. In my derivation I've had to assume they interact constantly, because modelling the abrupt 'bounce' would force me to specify the time it occurs over, and this is unknown/unknowable?

gtatty: Thanks. It looks much better this way..

Thank you. I've been waiting to see this critique for a while, I wasn't expecting a better theory as well!

A theory using a Zero point field would be isomorphic to a theory that explains it according to general relativity and changing the containers frame of reference by acceleration, correct?

thanks for the contrast change. Reading is easier now...

Hi Noah. Any such change to the reference frame would be completely arbitrary, since there's no mechanism in GR, that I can think of, for a cavity to effect spacetime in this way. My point, with galaxy rotation too, is that there's no way to explain it with GR, without arbitrary additions (eg: dark matter) and something new (MiHsC: the effect of horizons on quantum mechanics) is needed.

Hmm... What if you bounced some other type of particle back and forth between the big end and the little end, say something with a little rest mass like electrons? Would you see similar changes in inertial mass? Would the thrust be better or worse, or is there something special about using photons?

(Assuming this works at all, and I'm still looking forward to more replication evidence)?

Good point. MiHsC should work for objects with mass too. The problem is that you'd have to accelerate something fast enough so that the Unruh waves shorten to a similar size as the cavity and so interact with the walls. It's quite easy to 'accelerate' photons, as is done in the emdrive with the cavity itself, not so easy to accelerate solid objects. Electrons yes, but then you complicate things with em physics. The acceleration (a) needed to produce Unruh waves of wavelength L is: a=8c^2/L, so for a cavity ~0.1 m wide you'd needed a~10^18 m/s^2. If this can be done, put the vibrator in a 0.1 m metal cone and see if it drifts towards the apex. You'd have to account for and nullify other effects. You can see from my 2015 paper (eq. 10) that the thrust might be bigger (there'll be v in the denominator instead of c and the c^2 earlier in the derivation will be v^2, but that becomes KE and P, ie: the same).

Mike - Have you taken a look at NSF lately? Seems to be a major break through with the modeling end of things. How are you with 'Poynting vectors?' Areo *APPEARS* to have cracked some issues with MEEP, Rodal ran some interesting Poynting calculations, and Warp Tech may need sedating. At this point, what's being looked for is confirmation. No clue how or if this fits into your theory.

I applaud the NSF people for the work: it's interesting (though they don't give the magnitudes in their plots) but I've been revising Poynting vectors & I don't believe they are going to move the cavity: the consequences still have to obey conservation of momentum as usual (so nothing to do with MiHsC).

In general, I'm wary of the tendency in physics to use complex computer models (eg: thermal explanation of Pioneer, dark matter) to explain things, it is so seductive but the details are hidden and it can give the right answer for the wrong reasons. How many free parameters are in the model? Have they tested it on cavity data?

If you must speak ill of another, do not speak it, write it in the sand near the water's edge. See the link below for more info.

If the acceleration is coming from photons banging against one wall or another( F1 - F2 as Shawyer says in his paper), why have a back plate to negate some or all of the force applied to the front plate at all?

Hi
I have reviewed the info
How about accept the concept?
Rotate the input do the math.
My question is if you consider a planner horizon while simple the spherical horizon is x3 or x?
I believe in the simple statements one might spark the greatest ideology
:-)