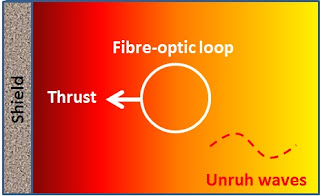 You could test with a fiber coil with one to many windings plus a fiber amplifier.
https://www.rp-photonics.com/tutorial_fiber_amplifiers6.html

Since you would not care about data noise but only signal strength the,
setup could be made a lot more effective regarding power to weight.
Possibly the LEMP would be ten to hundred times lighter than the EMdrive at equivalent signal output.

A fiber-optic loop is by definition reflective of photons, keeping them within the fiber. This reflectivity should also affect any Unruh radiation emitted by those photons, at least at some wavelengths, and that should have some effect (perhaps major) on thrust computations.

Nevertheless, it would be an interesting (and cheap!) experiment to run.

This is a great idea for testing your hypothesis, and would obviously have many practical applications if it works. It would probably be much easier to test than the EM Drive.

I do have some questions. Wouldn't the proximity of the Earth and/or other metal to the fiber loop in your testing environment (e.g., metal building materials) potentially provide shielding of the Unruh waves? Would the distance between the shield and loop be expected to make a difference?

Not sure it will matter, but the effective speed of the light in the fiber optic cable is more like .7c.

Ulrik: The best option would be to have a loop for the photons to go around many thousands of times, providing a large Q factor. So, a closed loop, if such a thing exists.

KAP: True: internal reflections would produce Unruh waves too. The damper would need to be tuned to damp the Unruh wavelength due to the acceleration of the looped motion (placed at the antinodes of the wave).

Parapraxis: Other metal in the vicinity should also have an effect. The trick would be, as I said above, to put the damper at the anti-nodes of the Unruh waves associated with the acceleration due to the main looping motion: so at 1/4 and 3/4 of a wavelength away.

Jack Cole: Good point, c would be reduced in the fibr-optic. Interestingly, 0.7c would boost the predicted thrust (F~PQpi/c), but would not effect the wavelength of the Unruh waves or the position of the damper.

Light under an object causes that object to gain weight.
http://www.gravityforces.com/?p=867

Is there reason to think that light through fiber optic cable might work better than electricity through a conductor?

A relatively easy experiment might involve either a platform floating on water or a setup using a low friction track.

>The best option would be to have a loop for the photons to go around many thousands of times
Or perhaps a stack of thin sheets ( squares ) where light could bounce from one edge to the other?
Basically to form a volume with thousands of layers.
The light would zig zag from one side to side on each layer before waterfalling / reflecting from one layer to the next.
In such a sandwich design you could either have one metal (Unruh) barrier at the top.
Or each layer could have its own barrier.
With barriers at each level you might create gaps matching the light reflections using numbers of Pi to avoid Unruh cancellation in the vertical plane from walls shadowing through the layers in the stack.

To keep things simple a fiber spiral could be used to approximate a disc shape.
Add a metal barrier at one side of the disc and send light through with a loop back at the other side.
Multiple discs could be added to create a stack.

Is this physics? Even from the edge.

Not sure it is.

Ulrik: I like your light-waterfall. A simpler option might be lasers or masers, which reflect light between mirrors.

I'm afraid, that the actual model of EMDrive will be more complex than this theory and it must consider the yield of recombined photons polarized with reflection - which is something, which involves the geometry of cavity between others. I've also problem with explanations of local forces based on distant informational horizons (including gravity), no matter how well it may fit some experimental results.

By the way, about unruh waves, is it only EM wave, and not other kind of particles, bosons, fermions-pairs ?
of course many of those are local (W/Z, gluons) or interacting quickly (charger fermions, neutrons) , maybe that is why it seems EM "mirrors" are most importants ?
maybe unruh neutrinos pairs are to be considered?

I don't understand well that sea of ZPE particles.

Zephir: the way I have applied MiHsC to the emdrive is an approximation, but a reasonable one given the large uncertainties in the data. A full treatment needs a 'waves in cavity' model which I do not have.

Regarding non-local influences, note that the phase speed of monochromatic (Unruh) waves is not limited to the speed of light.

Alain: Unruh waves are waves in all the particles' fields.

How is your theory different from Woodward's Mach Effect Theory?

Very different. Woodward's theory, as far as I understand it, is based on higher order effects derived from general relativity and predicts transient mass fluctuations in objects absorbing energy while accelerating, among other things.

MiHsC is built by combining quantum mechanics and special relativity in a new way, and gets rid of the need for gravity (GR). So the two theories are very different.

Nevertheless, some of Woodward's experiments look to me like they might be explained by MiHsC, but I haven't looked at it in detail, for various reasons.

Czeko: Thanks for that. I've tweeted it..

Not that there's not plenty of weird critters in the Particle Physics Bestiary to be possible candidates, but they're all proving to be Unicorns.

If the force is inversely proportional to the speed of light in the material, why not pick a material (or meta material) with the highest potential Q and the lowest speed of light?

Alas, Google just gives me all the initiatives to boost the speed of light. Those real time traders have a lot of money to spend...

Of course it is tempting to try to find a shortcut in understanding chaotic and complex reality, but pondering such clearly false ideas seems like a massive waste of time to me.

But hey! It's a free world.

Alas, to energize a closed fiber loop, you need a pump combiner, of which the efficiency is about 95%. You'll lose half of your power after 13 times around the loop.

I don't think you are going to get a Q of 10^6 from any available optical cable components. I suspect if you take a 100m cable and loop it with a diameter of 1/2 meter (200 turns) along with a good pump combiner you might get a Q of 2000 or so.

Wouldnt a Fabry-Pérot interferometer detect the perturbation of the photons? (lots of bounces) Basically just move the shield over the top of the device, if Unruh radiation perturbs the photons you should see a change in the interference pattern. My physics is too rusty to trust my calculation.

Good suggestion. The Unruh waves would have wavelengths of a cm or so, so it'd be necessary to move the shield to expected nodes & antinodes, & look for a change..

No amplifier needed like in a recirculating fiber loop. https://www.rp-photonics.com/recirculating_fiber_loops.html

This is very interesting. Maybe the next project if I ever get this cavity working. (I'm buildanemdrive.org guy)

One of the few sites ive seen real physics brainstorming without fear of looking stupid or "out of the mainstream" kudos. For some of these ideas can't you plug in the variables with comsol and determine if their is a useful effect? On an unrelated topic, I saw where it was claimed that many of the black holes are aligned. 1. Do you agree that they are and 2. If the are, what would be some of the theories that would account for that phenomena?

Mike S: Many thanks. Indeed, you cannot do progressive science if you are worried about looking daft. That was one of the first lessons we learned from Socrates.

Re: comsol, I'm wary of computer simulations, and much prefer working things out on paper because there's nothing 'hidden', but it may come to that..

It is right that many quasars are aligned, and quantised inertia predicts something like that, please see:

Dear Mike,
If find your theory very interesting.
But I dont think your design will translate to a drive.
if there will be less radiation pressure between the shield and the loop, doesnt that lead to bigger pressure from the left on the shield, push it to the right. So, at best the loop will gravitate toward the sheild, but the whole setup wont thurst leftward.

also, are photons in a constant state of acceleration ? cz their refelection around the loop is not the same as angular acceleration.

Also, what exactly does the shield do in a physical sense? Does it absorb the radiation, turning it into .... ? Does it make the area harder for something to top pop up in our world with momentum or mass ? .... can u elaborate on that part at lest for the layman ?