The Data's the Thing

Actors have a saying "The play's the thing", ie: the play comes before the ego. Similarly scientist's should say: "The data's the thing". History and common sense back up the importance of data. Scientific progress has never involved playing it safe and fudging 96% of the cosmos with invisible dark stuff to preserve egos or the status quo. Progress has always come from looking at controversial new data, and thinking anew.

Quantised inertia is the result of pondering new data from the cosmic scale to the atomic, and I have had empirical success at various scales (cosmic scale, galactic scale and Solar system scale), but the lab scale is particularly useful because a desktop experiment can be easily controlled and reproduced. This is why the emdrive has caused such a furore: it is forcing people (well, some!) to question familiar physics for the first time in nearly a century. Not bad for a little copper cone. I do not discount the possibility it might still be wrong, but those who claim it is wrong have to say what it otherwise is, and not just say "it's wrong" as if they have God's phone number.

In all this it is important to keep focused on the data so here is a table of all the emdrive results so far. We have to be cautious because some of these results have been published with varying degree of peer-review (shown in bold) and some have not. I have also included a new result from 'monomorphic' on the NSF forum, so there are now 11 data points, seven of them published in conferences and one (NASA2016) in a mainstream journal. 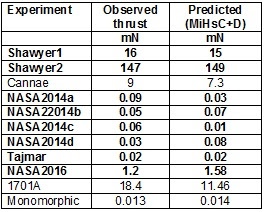 The table gives a identifier for the experiment on the left in chronological order from top-bottom. The second column shows the thrust observed in milli-Newtons (mN). The third column shows the thrust predicted by quantised inertia (MiHsC) including the effect of dielectrics (which reduce the speed of light in the cavity). I submitted a paper on this dielectric version of quantised inertia to EPL about a month ago so I should have the reviewers' comments soon. The new 11th data point from monomorphic is shown at the bottom. His power input was 1 Watt, his Q value was 8100 and his cavity had no dielectric and was 0.24m long, and had wide and small end of diameter 0.299m and 0.178m respectively (according to his NSF posts, please correct me if I am wrong). The thrust he measured was 13 microN and quantised inertia predicts 14 microN.

Given all the data surely you have to agree that quantised inertia predicts pretty well for a theory that can not be adjusted and is still an approximation. It ideally needs a computer model, like COMSOL, to do it justice, because my usual technique of scribbling maths on bits of paper is unable to capture em-modes and their complex interaction with horizons.

It would be useful to compare the predictability of quantised inertia with that of the other emdrive theories by looking at some ratio of how accurately they predict the data, over the number of arbitrary parameters they need to do it, but I have not seen any comparison plots showing observations and calculations from the other theories (I may have missed them). If the Plymouth-Emdrive workshop gets off the ground, I will make sure it is empirical. Ernest Hemingway once said: "If a writer stops observing, then they are finished". I think the same thing goes for physicists.
Posted by Mike McCulloch at 11:32

What's required to build the computer model? I have a good undergraduate maths degree, and 18 years professional experience building software (including developing several physical rigid and soft body simulation models for real-time use and implementing various numerical integrators), so I might be able to help if the maths isn't too demanding.

I've had the idea that once we are able to accurately simulate the microwave distribution inside an emdrive cone, since it's open source we could also apply QI principles to the simulation and directly calculate expected thrust.

Once we have that running accurately, a genetic algorithm could be applied. Repeat simulations until we generate something optimal. One of the (incorrect) criticisms I keep hearing about your theory (I'm looking at you Forbes) is that the emdrive's signal is less than the noise. If we could generate an optimal shape that could potentially buy us an order of magnitude and make the thing jump off the desk, I think that would be a lot harder to brush off.

I have a sensible question and a rather silly one followed by one I saw from a discussion on the EM drive wiki.

What kind of efficiency can an RF cavity thruster achieve?

Several developments have taken place in the last few years:

Shawyer's 2nd generation EM drive paper, where he even describes a prototype spacecraft.
The creation of metallic hydrogen, which is purported to be a room temperature superconductor.
Optimisation techniques have been applied to the dimensions of the cavities.
The optimal magnetic fields have been researched for Hall thrusters (could this improve Q for RF cavity thrusters?).

My view is that if the EM drive gets 5% or more input/thrust efficiency, spaceflight becomes a new normal. From what I can find, the best RF cavity thrusters have an efficiency of less than one tenth of one per cent. A small 5 MW reactor with 5% efficiency would produce enough thrust for viable spaceflight and orbital launch, as well as painless "flight" and fantastic flight properties.

Now for the silly question:

Would it be possible to build a multi-stage EM drive where different semi-reflective meta materials of different cavity shapes are held within a larger cone. So basically it might consist of a large cone with 20-30 small EM drives/Cannae drives to maximise the waveguide/interference producing the thrust?

Finally would it be possible to create a "cone-less" drive where diodes(?) create their own "virtual cone" by changing what is switched on and not at differing frequencies?

There is clearly a lot to learn. We're not even at the "Model-T" stage of this technology yet, despite going back to the 1950s, for the ideas that inspired Shawyer.

Jamie: Thanks for the offer of help. It's difficult :) What needs to be done is to develop some code to determine the distribution of accelerations of photons in the emdrive cavity. Then the Unruh waves they see and how those will be damped in the emdrive. Have you read my paper?: https://arxiv.org/abs/1604.03449

I've re-read your paper. I can generally follow the substitutions and equation wrangling, with some queries:

- I'm not sure what's going on with equations (8) and (9); I can see where they come from, but don't really understand the justification. I know next to nothing about electromagnetic resonance; maybe I'm put off by the idea of having 6 orthogonal directions in 3-dimensional space :)

- I don't follow the justification of the substitution of (8) and (9) into (7) to give (10); unless I'm missing something, this isn't a straight substitution, Ws bar and Wb bar aren't the same as Ws and Wb, so I'm not sure how you can substitute one for the other.

- Similarly, I'm not quite sure how we can just throw Q in to get (14) (I understand the photons will resonate for a time, of course).

Anyway, my uncertainties may not matter: if the model is as simple as chopping the cavity into cells and applying known equations and iterating over time, that's easily done. A complete quantum simulation, however, is probably beyond my spare time capabilities :)