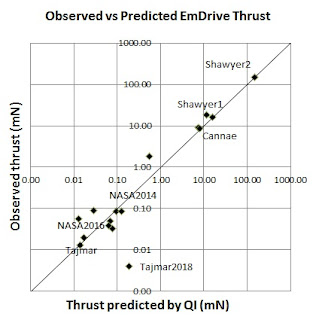 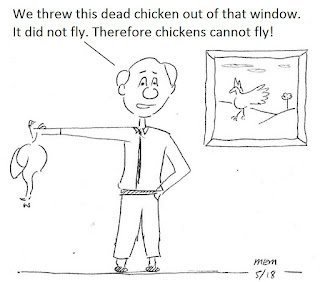 The EMdrive is not so simple device as it looks at the first sight, as it generates thrust by polarization of microwaves by repeated reflection under Brewster's angle. There is considerable know-how in Shawyer's original design: everything - the shape, the placement of waveguides, etc. - matters here. Creating a replica doesn't warrant that this replica will fly, until you don't know about principle of its function.

But who cares about some dumb physicists after all? They never had working plans of nuclear bomb neither from good reason. Chinese have it, NASA too.

I share your view... it seems like anything on the edge of useful gets squashed if it threatens the status quo.

Sorry if this is a repeat... it seemed to eat my first attempt at a comment.

Scott Manley has a nice 8 minute video overview of the experiment although he does not address Mike's point that Lorentz Force was tested for and eliminated in NASA testing...

Mike - today the dead chicken cartoon has disappeared. Please restore it, unless you think that poking fun is unprofessional. I thought it was good....

Replications of such "outrageous" devices do tend to run into problems like these where the person trying to replicate is really trying instead to prove it doesn't work, and hasn't understood why the thing worked in the first place. Momentum is not actually exactly conserved where the field is changing, and the greater the rate of change of the field the more the error in conservation of momentum. That's using schoolboy physics (reaction between a current and a magnetic field), without going into QI or anything complex. It's thus not really a question of whether CoM is broken, but of how large the effect is. With unchanging fields, CoM is however precise, and that's what we normally work with.

Quote by the lead researcher:

""[Dark matter] is the scaffolding on which galaxies are built … Not seeing it means that something else happened.""

Maybe this will be what gets the academy to skewer CDM.

Zephir: They have not tested QI: the formula they used is from MoND and is different.

Lest you let the state of scientific investigation get you down just reflect on the quote:


“The two most common elements in the universe are hydrogen and stupidity.” (Harlan Ellison)


It helps keep things in perspective. Eventually reality trumps stupidity and science progreses. As for hydrogen it remains.

What about dark matter though?!

It is not even necessary for galaxy formation.

Hold up. I think we've all missed a wry joke here; the paper supports MOND and rejects DM, but because DM is still the dominant paradigm, researchers tend to be mealy-mouthed to let the facts sink in for those who prefer research results to be set in stone like the Encyclopedia Britannica article they read when they were 13...

"At more than 1 in 3.5 million simulations, the MOND model is rejected..."

Come on guys, let's think about what those p-values mean. Let's read the full abstract, at least!

*We study geometries of galactic rotation curves from Dark Matter (DM) and Modified Newtonian Dynamics (MOND) models in (gbar,gtot)-space (g2-space) where gtot is the total centripetal acceleration of matter in the galaxies and gbar is that due to the baryonic (visible) matter assuming Newtonian gravity. The g2-space geometries of the models and data from the SPARC database are classified and compared in a rescaled g^2-space that reduces systematic uncertainties on galaxy distance, inclination angle and variations in mass to light ratios. We find that MOND modified inertia models, frequently used to fit rotation curve data, are disfavoured at more than 5σ independent of model details. The Bekenstein-Milgrom formulation of MOND modified gravity compares better with data in the analytic approximation we use. However, a quantitative comparison with data is beyond the scope of the paper due to this approximation. NFW DM profiles only agree with a minority of galactic rotation curves. Improved measurements of rotation curves, in particular at radii below the maximum of the total and the baryonic accelerations of the curves are very important in discriminating models aiming to explain the missing mass problem on galactic scales.*

I would re-read the article that Zephir linked to. I think he was being humourous. The results, being rejected at five sigma, shows that the chance of the results being false is one in 3.5 million.

I expect QI to have an even smaller p-value, perhaps only being rejected at seven sigma or more.