In 2017, an electrical engineer called Frank Becker contacted me, saying that he'd read my papers on quantised inertia and the emdrive and he particularly noted my discussion that dielectrics placed inside an emdrive might enhance thrust. It reminded him, he said, of an experiment that he'd done years ago trying to replicate the Biefeld-Brown effect with tin foil capacitors and dielectrics. Indeed he had seen thrust towards the anode just as Biefeld & Brown did.

After he emailed me, we liaised on occasion via skype, and the following year or so he teamed up with an actor called Ankur Bhatt who also has an MSc in engineering and they did some Frank-ly (forgive the pun) brilliant experiments. I advised them as much as I could on QI. A schematic of the experiment is shown in the Figure and you can find the details in the paper below. The capacitor plates are on the right hand side (the grey lines). You can see the electrons accelerating to the right from the cathode to the anode (red arrows). 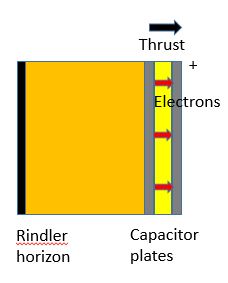 The electrons accelerate to the right over an inter-plate distance of 10 microns and a potential difference of 5000V, so their acceleration is huge (10^19 m/s^2) so they see a Rindler horizon only about 2 cm to their left (the black line). Normally in QI, when an object accelerates rightwards the Rindler horizon on its left damps the quantum vacuum on that side pulling it back against the acceleration. But, here, this is reversed since the two plates damp the vacuum to the right (a Casimir effect) more than the horizon does. The yellow shading here denotes less vacuum energy than the orange shading. So, here there is an extra push to the right and the electrons accelerate more than you'd expect, pushing the anode more when they get there.

The most crucial component of this experiment is that Becker and Bhatt also played around with  putting metal plates in various positions around the setup (Edmund Blackadder - "It's not what you've got, but where you stick it!") and found that when they placed a metal plate to the right of the horizon it reduced the force (it's like a closer horizon) but when they put the plate behind the horizon (to the left) the effect of it vanished. This may be the first direct observation of a Rindler horizon and backs quantised inertia very strongly. I've just written a paper, soon to be submitted, that shows that QI predicts the thrusts they saw.

Becker & Bhatt deserve a lot of thanks for this experiment. If the thrust can be confirmed, it is one thousand times what I was hoping for from my photon-based experiments. I am now funded to reproduce their experiment at my university, starting in May.

Hi Mike,
I have studied this device in great detail with both Becker and Bhatt. I would like to correct the overly simplistic explanation of the insertion of the metal plate. If the metal plate is placed to the right of the horizon, *and* electrically connected to the cathode, the effect reduces as you mention. However, if the inserted plate is insulated from the cathode, the force *completely inverts*, generating a force towards the horizon. I believe this is because the insulation acts as a dielectric, and the net polarity of the electric field in front of the horizon determines the direction of the force, while the distance of the horizon determines the magnitude of the force.please read carefully the results of the paper and let me know if you disagree with my interpretation of the data.

"found that when they placed a metal plate to the right of the horizon it reduced the force (it's like a closer horizon)"
Sounds like a Baldrick 'cunning plan'. ;)

Good luck and congrats on the new funding.

Mike - this looks pretty major to me. Since it seems the force can be multiplied by using multiple layers in the capacitor, and it improves the thinner you make the dielectric, it seems to me that you should be able to sputter a suitable multilayer device with very thin dielectric and conductive layers. Maybe also worthwhile using a low work-function conductive layer too to improve the electron emission without needing to heat the device. May need some thinking about the dielectric, and what properties would be nearest ideal.

With the measured force here being of the order of 0.3mgwt (3mN) maximum, having a lot of layers but where the field in each layer is close to breakdown should make the available force large enough to easily measure. There may however be a problem of those highly-accelerated electrons knocking atoms of the dielectric out of their desired locations. This happens with MIM rectifiers in nantenna arrays. Previous data I've seen is that those point to plane Nickel diodes with around 2nm of NiO as the tunnelling barrier last around 3 months because of that. Obviously here they're using the field concentration of a point emitter, much the same as in the arXiv article you pointed at where a scratched surface produces that field concentration and higher emission in one direction.

I'd like to check as to anode and cathode here, since it's actually not a well-defined terminology. With cathode being "the way out" for conventional current (that is, the opposite way to the electron current), and thus the anode and cathode swapping when you're either charging or discharging a capacitor or battery, I'm assuming that the cathode here is the -ve electrode (because we aren't discharging it but simply putting current through it). Thus the cathode is the one emitting the electrons. Because of this possibility of someone misinterpreting the term and getting it exactly wrong, I stopped using the terms anode and cathode a long time back.

Just for interest, there are alternatives to flyback transformers using piezo transformers, which will be lighter and probably easier to integrate if you're building a test rig. I haven't seen them from cheap sources, but main distributors ought to have them. If you're building the force generators by sputtering thin sub-micron layers, you may not need to use such a high voltage, too.

Looking at the work-function tables, Caesium is the lowest at 1.9eV but might be a bit difficult to work with. Lithium at 2.9eV might be easier, but looking for a dielectric that wouldn't react with that could be tricky. It might be pretty good to sputter Magnesium (wf 3.66eV), allow some Oxygen in to produce a layer of MgO (wf 3.55eV) to be generated on the surface, then the next layer of Magnesium, rinse and repeat. Cover the last layer with something that won't corrode (Nickel, Gold, etc.) and gives good contact. Might be cheap and easy to do, and get a lot of layers quickly by just modifying the sputtering gas mix.

Wow, this looks promising. Best of luck with this new project.

Hi Mike:
Wonderful to hear that you have a QI shielding experiment, the missing link. Best of luck.
Thank you

Materials science seems to be the key to unlocking most of these nascent technologies.

Glad I chose a Chem major and mathematics/physics minor now.

More physics and maths can be studied post-grad!

If performance of a piezoelectric component or the Q factor of a frustrum can be increased by many orders of magnitude, then the usefulness of exotic propulsion moves from possibly proven new tech to commercialisation very quickly.

Is it possible to engineer the capicitor to be around a curve? As in to maximise the acceleration and hence QI effect per Smolyaninov's idea to demonstrate Unruh waves?

There is a very serious problem with the device of Becker and Bhatt. Experimental physicist Prof. Martin Tajmar and his team performed extensive tests on this device in 2020 with negative results. This device does not produce any measureable thrust. Martin Tajmar has earned a reputation as an experimentalist and his laboratory offers unique precision in detecting even incredibly tiny forces.

Dear 'Unknown'. I referred your comment to F. Becker and A. Bhatt and they have kindly sent the following comment:

Also one testing attempt of one broken capacitor is not considered (with regards to the ‘serious’ problem statement content) “… performing extensive testing …”.

The testing and replication attempt by Prof. Tajmar shows the following serious problems.

(A): The decision to use a thicker polyethylene than B&B used would reduce/prevent any possible effective field emission due to lower electric field strength. 80um used by B&B was essentially the control and one would see very little current. 10uA passing through the unbroken capacitor is essentially impossible using Tajmar’s HV supply.

(B): As noted by Prof. Tajmar the voltage across the capacitor (circuit) reached a max. 4kV and reduced during discharge to 2.1kV. This clearly indicates that the setup had an initial insulation fault (4kV vs. 5kV input) and was later on further damaged down to 2.1kV. A reduction of output voltage is a clear sign that something is very wrong.

Note: For the external insulation the apparent type used (cit.) "... Scotchweld Epoxy..." (grey) is rated for 480V/mil (according to 3M specifications) which might also cause some insulation breakdown complications.

In his paper he also considers this possible damage, but decided to continue testing the same device instead of assembling a new one. This reduction (collapse) of voltage across the capacitor circuit is obvious evidence of damage. It follows that only a leakage current insulation breach had happened and that the experiment in Dresden, by that, is entirely invalidated. Normal leakage currents are not associated with positive results. Leakage currents lead to a very low drift velocity, thus would not contribute to any high accelerated electron events.

Conclusion: The attempt at replication of B&B has failed due to fundamental experimental and setup mistakes."

I don't know why some physicists change the conditions of a supposed replication attempt to make the effect a lot smaller than it is. I guess they think they know better what the effect should be like in their minds. Then they draw broad conclusions when they see nothing. It really sets science back.