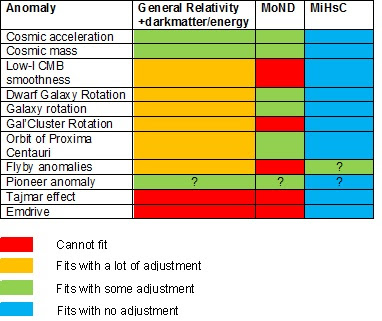 MiHsC performs well without needing adjustment at all (lots of blue). This is because I have designed it from the ground up with some of these anomalies in mind from the start. This is how science should be done: working from the data to a theory, not, as is done with general relativity, by fudging a revered theory to fit the data. The details of this table are open to debate, but MiHsC obviously performs best on this measure, and more generally: scientists should try to propose theories that produce a conclusive red or blue, not orange.
Posted by Mike McCulloch at 03:57

A simple formula that fits almost all data. So disturbing for the dark matter advocate...