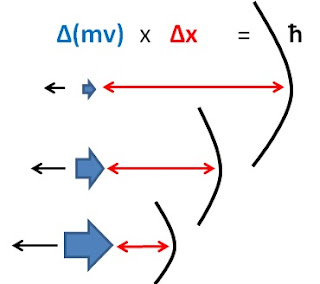 The two boundaries become discrete. The transactional boundary moves. The boundary in the direction of movement is always Hubble divided by the speed of light . The infomational boundary where objects can signal to you but you cannot interact with them because of Hubble is Hubble horizon-acceleration or the Rindler boundary behind you. Two masses moving relative to each other create waves They can be electromagnetic or gravitational The maximum wave length you can perceive is limited by your Hubble horizon. Or your Hubble horizon- Rindler when experiencing acceleration.

qraal: I assume you mean relativistic aberration, or relativistic beaming. It will, but only when v->c. This would be a non-acceleration way to cut down dx.

Hi Mike
It's fascinating that you get a value so close, yet not close enough, but suspiciously like the ratio between 'matter' and 'dark energy'. I feel that's telling us something, but can't put my finger on it.

The commutation relation will remains the same form in a frame with acceleration?
Or in other words, the Fourier representation of momentum operator still valid in a accelerated frame?
The UP is a direct result of these representations for quantitative answers.