The Range of Quantised Inertia

I've just finished teaching my Space Exploration module at the University of Plymouth. The useful thing about teaching is that it renews knowledge and helps one to view the subject as a whole. Of course, I gave a research lecture on quantised inertia (QI) and made a useful new summary plot for it, just to show the range of anomalies or phenomena in physics that can be explained and predicted by quantised inertia, and not by standard physics. The plot below shows on the x axis the scale of the phenomenon (in a qualitative manner), from the sub-atomic proton radius anomaly on the left to the oddities at the cosmic scale on the right. The y axis shows the accelerations within the phenomena from the infinitesimal cosmic accelerations at the bottom to the emdrive full of resonating microwaves at the top. The text boxes show all the anomalies QI predicts. I have published all these agreements, apart from Proxima Centauri & the proton radius anomaly, in mainstream journals. This is not to say I can confirm all these anomalies, and some of my analyses are incomplete (eg: for the flybys), but taken together they build a very strong empirical argument for quantised inertia. What other coherent theory can do all this? None. 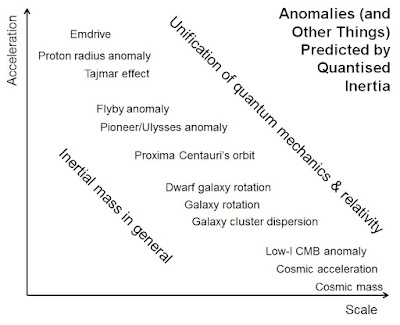 Poor old standard physics does not predict any of these phenomena without inventing arbitrary exotic matter and arbitrary new physics to go with it: like the awful dark matter hypothesis which has now been falsified, for example by this paper. The anomalies in the plot are not a small problem either: they represent 96% of the cosmos! QI needs only a relatively small, if fundamental, tweak to standard physics to predict them all. All you have to do is allow the horizons made by relativity to 'damp' the quantum vacuum, making inertial mass as a side product. This is very satisfying and goes some way to reuniting the bifurcation in physics produced by Einstein when he sent the subject off onto the contradictory quantum and relativistic trajectories. Most physicists prefer to add bits to existing physics rather than tweak the equations that already exist, but QI tweaks those equations very very slightly, and in a way that does not violate any data, and, as the plot shows, it predicts a lot more that way.

To see how quantised inertia explains these phenomena, follow these links to the published papers /preprints::

A nice map of how current astrophysic fails at explaining the universe with an unfalsifiable theory.

Peaks are directly related to the amount of failure.

And for our pleasure :

"Scientists believe dark matter -- theorized, unseen particles that neither reflect nor absorb light, but are able to exert gravity"

Mike. It is easy to get published. Add an exotic DM particule to QI theory. Kidding.

Czeko: Thanks. There have been maps like this before. There was a nice one with lots of turtles, another with epicycles.. If they put question marks on them instead we might progress a little faster!

"Dark Matter" maps work from the data that indicates extra gravitational lensing by Galaxy clusters. That's real observational data, even if DM is a plank of theory over the abyss of ignorance. How does Horizon Mechanics tackle the issue of light-lensing by 'dark mass'? Just how do photons feel the Horizon?

Photons have inertial mass, just like normal matter (they carry momentum). So quantised inertia predicts that photons should behave oddly at the edges of galaxies and beyond, in exactly the same way that the stars do. QI also predicts the oddities seen in photons resonating in the emdrive: a more down to Earth demonstration.

Hi Mike,
Well that's good to hear, but how does the microphysics work in word pictures. The Horizon Mechanics of particles makes sense, but I'm stumped how it works for photons/waves. A conceptual Horizon...

qraal: I'm getting ahead of myself here, but I would like to get rid of waves and particles and express everything as informational 'agents' which see horizons. I can show that horizon dynamics can be derived just from 'agents' interpreting the uncertainty principle in 3d. This is much cleaner than using Unruh radiation (but is just a different interpretation of quantised inertia - same outcome). I haven't published all this yet, but I made a start in my recent paper 'Quantised inertia from relativity and the uncertainty principle'..

I wonder how QI handles the "Dipole Repeller" and "Shapley Attractor." http://www.cnn.com/2017/01/31/world/milky-way-dipole-repeller-space-trnd/index.html

Perhaps more anomalies QI does a good job with?

I think the repeller/attractor are not really anomalies, but just relatively empty and less-empty space? Could be wrong.

Hello. I'm just getting acquainted with your work, and I found my way here via studying the emdrive. I have a few questions regarding MiHsC, particularly pertaining to warp drive, or faster than light travel. MiHsC and the emdrive seems to be a VERY PROMISING means of accelerating up to great speeds within the subluminal realm and be a practical way of traveling to near stars. But warp bubbles and FTL are where its really at as far as having a galactic civilization on the level of Star Wars is concerned. White and Juday are also talking about warp bubbles and doing interferometer tests for warp bubbles. The results are inconclusive. As far as I understand, an emdrive and an Alcubierre warp bubble are two different things and would operate on two different technologies, although they may be cousins of each other, physically speaking.

What does quantized inertia and MiHsC predict about warp bubbles and FTL travel? Thanks.

Honeyradiance: There are two ways that MiHsC relates to FTL. First it does not allow a constant speed (there's a minimum cosmic acceleration), so there can be in MiHsC no cosmic speed limit. This relativity-proof minimum acceleration may be boosted by using metamaterials to create a 'closer horizon' (see blog and paper below). Second, in the MiHsC philosophy, if an area of space-time cannot be seen in principle, then it does not exist, perhaps enabling us to step across it.. I have been unable to publish these possibilities, except in the discussion of one paper, in my book and on my blog(see links below):

That reminds me on a science documentation of the German WDR around 1997 where a university experiment was described where photons (basically a laser beam) where shot through a very thin gold foil and it could be measured that the outgoing impuls appeared superluminal. The called it that time "tunnel effect", but it appears being different of the conventional quantum physics tunnel effect.

Frank: I did notice that FTL(?)-quantum-tunneling experiment, and I emailed the experimentor, Guenter Nimtz, but received no reply.

qraal: It is true that if you did travel faster than light then you would overtake your horizon and in a sense delete yourself from the universe. The trick would be to construct a logically-consistent theory based on this! You may at least have suggested a way out of the causal dilemma I outlined here: http://physicsfromtheedge.blogspot.co.uk/2014/07/supernova-thought-experiment.html

Mike: I believe I have a pretty good visual memory and believe to remember that perhaps some persons middle 90's in Germany where involved, but the camera team was visiting a experiment site in the US, might be MIT or west cost area. As far as I remember the experiment setup from the documentation the laser was steady applied and a comparision measurement of a modulated impuls in front and after the gold foil was applied. Basically measuring the run time throught the barrier. I remember the statement that the impuls came out of the goldfoil too early.

I want someone to help with physics homework which is a necessary part of physics learners. We have lot of institute that are offering but i just want authentic things.

php programming assignments means that it will take you a lot of time and effort not to mention a lot of debugging to get it done right.

Java may be a common artificial language. it absolutely was very fashionable before the .NET era however Java continues to be the trending language among students and app developers. There area unit many books on the market to be told Java. whereas some books examine plain Java programming, there area unit solely few books that cowl Java programming with the assistance of IDE like Visual Studio. Murach's starting Java with NetBeans book examines all aspects of Java thoroughly with the assistance of NetBeans IDE. netbeans help

Fantastic article. Thanks for sharing..

Education the act or process of imparting or acquiring general knowledge and this really a very good educational article. Here you provide good details about the range of quantised Inertia. The trick would be to construct a logically-consistent theory based on this pascal homework help. Thanks for share so helpful article.